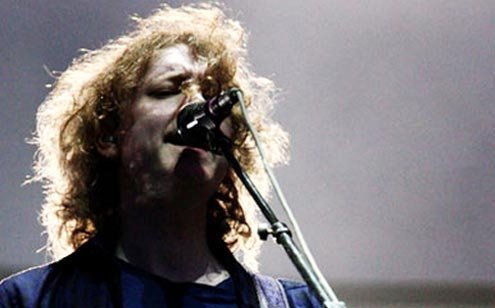 Kevin Shields of My Bloody Valentine. "The wayward scions of noise-pop," writes The Observer.
S

ometimes you can look at a month’s music releases and know exactly what you want to write about before it ever begins. On the morning of February 2nd, this month looked the same.

Then, the next morning, we were living in a world with a new My Bloody Valentine album.

What’s disappointing about their lazily titled new full-length m b v (Pickpocket) is that it doesn’t sound like a progression from 1991’s seminal Loveless. If anything, its 46 minutes are a regression.

The Irish quartet has long epitomized “shoegaze,” a style of rock so coined by the British press in the late-1980s because the bands that it represented tended to stare at their feet during interviews and at their effects pedals during live shows. It was the Valentines that best sharpened the rough diamond of harrowing guitar noise and sunny pop pioneered by The Jesus and Mary Chain into something of eternal beauty. That’s Loveless in a nutshell: the total package, an immersive experience, and still one whose enduring appeal few records can match even 21 years later.

Loveless produced waves of devotion: documentaries, magazine articles, and books. It also saw albums in some way dedicated to and copping moves from the record’s release and mystique. It’s a lot. Knock yourself out.

Interestingly, though most of this latest material was written and recorded between 1993 and 1997, songs like “Only Tomorrow” and “Nothing Is” slot more comfortably in the years between 1988’s Isn’t Anything and Loveless. The band doesn’t sound otherworldly here. Guitars are loud and grungy, vocals are often distinguishable, and songs do not melt effortlessly into one another. It’s kind of a mess.

My first reaction was to think of a year: 1989. The music on this record is how they sounded on the Glider and Tremolo EPs, while on their way from being a really good band to a truly great one.

There are hints of electronic styles in the percussion that are so outmoded they’re cool again (early 1990s UK rave culture, drum n’ bass by extension). There are also traces of the ethereal untouchability that was to come on a song like “New You,” but otherwise this is a very immediate record. My Bloody Valentine sounds like a band of humans playing recognizable instruments, in other words, which makes the tangibility of the album’s existence that much more sharply felt.

What’s inspiring about m b v is its mere existence. At some point, guitarist and band mastermind Kevin Shields summoned the willpower to defeat two decades of impossible expectations and his own reluctance and just let it all go – the exhausting back story, the paralysis, the music. That can’t be understated.

Is it a letdown? Of course. But Shields has finally freed himself and his band of the burden of being My Bloody Valentine. With m b v, they have the key that unlocks the rest of whatever music they’re capable of together. Maybe there isn’t any. If not, so be it — perfection once in a lifetime was always more than enough.