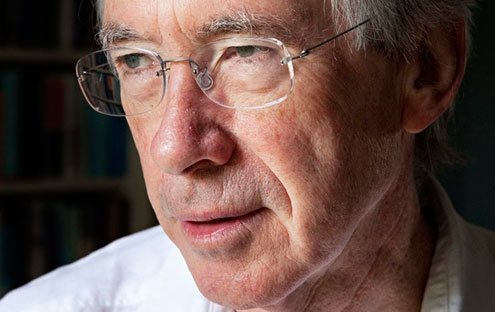 Ian McEwan tackles the legal side of rational vs. irrational, with faith introduced into the equation.
L

ondon, a Sunday in late spring; “implacable June weather.” This crisp, compact opening is classic Ian McEwan, and it serves as a moody signature opening for his 13th novel, “The Children Act” (Jonathan Cape: London, 2014). The oppressive weather mirrors Fiona Maye’s mood. “Married to the law,” Fiona is a family court High Judge whose own marriage is coming undone.

In brilliantly brisk sequences, McEwan will examine one of his career-long concerns: the life of responsible reason vs. irrational emotion (a category in which he includes faith-based beliefs).

Story kick-off: husband Jack shatters Fiona’s reflections on her latest brief by announcing, “I need sex.” He’s planning a discreet, sideline affair with 28-year-old Melanie because his wife has “lost interest.” She wants to scream: I’ve got an exhausting court docket in which families are at war over money and the rights over their children.

But Jack is busy clamoring for his “rights.”

Her phone rings. She’s on duty call and the job takes precedence. Jack leaves the room, and their home.

Three months pass; silence between them. We do overhear Fiona’s occasional and coolly oscillating marriage ruminations. Then: a final, and predictable resolution. Mayes’ marital dilemma bookends the novel and recurs throughout as a kind of background noise, creating a narrative skeleton. But it’s a pretty slender framework. This book’s true heartbeat lies elsewhere, in a wrenching story-within-a-story: the drama of young Adam Henry. Unfortunately, Adam doesn’t actually crop up until the mid-section, though his case is introduced much earlier.

The Sunday call Fiona received while warring with Jack announced the insertion of his life-emergency trial in her docket. On religious grounds, Adam’s Jehovah’s Witness parents refuse to let their son receive a blood transfusion. But Adam has leukemia. Without the procedure he risks a painful death. He’s three months short of 18, when he can make his own choices. For now, he’s adamant: “I’m happy to die for my faith.”

Fiona, as she does often, will be required to interpret Britain’s 1989 “Children Act,” whose straightforward language belies subtly shaded legal and human implications. McEwan quotes from Section 1(a): “When a court determines any question with respect to … the upbringing of a child … the child’s welfare shall be the court’s paramount decision.”

McEwan has certainly done his homework. He convincingly fictionalizes crucial, Act-based decisions, attributing them to Fiona. Yet while Fiona’s lead-up cases monopolize the book’s first half, they remain little more than summaries. Their living characters get little stage time.

Jack’s sex problems are also soon moved offstage. His desire to discuss them interrupts her thinking a case involving the separating of Siamese twins. One of the twins, Matthew, has no independent functions. His twin Mark keeps him alive but the surgery will kill him. Their Catholic parents oppose surgery. Fiona will argue that Matthew, unlike his brother, cannot be said to have “interests.” She declares for the “welfare” of Mark, and in favor of the separation that terminates Matthew. It’s hailed as a landmark ruling.

Adam Henry’s case then takes center stage. Fiona has reams of legal precedent that can cancel out both Adam’s and his parents’ ideas of “welfare.” But before ruling, she wavers. She visits Adam in the hospital, and unprecedented and unorthodox move.

There, childless Fiona is enchanted by the sight of a smiling youth propped up in bed, his sheets littered with poems he’s written. And there’s a violin. Though he’s determined to die for his religion, he wants to learn to play the violin first.

He plays a piece he’s just mastered, one Fiona knows well. She surprises herself and Adam by singing the words to it. At song’s close she decides what she must do. Adam is convinced this warm, understanding woman is on his side.

In her legal role, she may well be. She orders the transfusion. As expected, his religious brethren strip him of all rights. Rebelling against the decision, Adam argues bitterly with his parents. Fiona gave him life, but forgot that by doing so she automatically withdrew his lifetime support system. Now, without a community or a home, he needs a mentor. Perhaps Fiona? When he does finally manage to meet her, she rebuffs him sharply, then, on impulse, seals the refusal with a kiss. Adam will call it “the kiss of Satan.”

Meanwhile, Fiona’s marriage heals. That part was never terribly engaging, nothing like the pulsing secondary drama of brilliantly alive Adam Henry. His life-death story vitalizes the novel. It provides the sole, humanly dramatic scrutiny of the complexities involved in interpreting and executing a legal system. It is Adam’s story that fully evokes the novel’s only lasting question: can anyone truly know another human being’s “welfare” and “interests”?