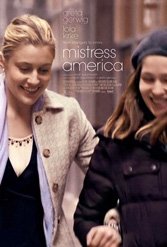 Baumbach, always at home with New York City filmmaking (“Frances Ha,” “While We’re Young”), effectively captures Tracy’s sense of longing and nostalgia for family feelings that often engulf first-year college students in search of friendship and sense of belonging. Bubbly, voracious Brooke has all kinds of ideas but little interest in seeing any of them through. Her character inspires Tracy to write an essay that earns her a prestigious college literary club.

So far, so good. But what seems to be a happy-go-lucky character study takes a shaky turn when cheery Brooke shows her true colors: she’s catty and mean. Except that she’s neither developed nor loveable enough to withstand the transformation. It doesn’t help that Tracy has her own if milder case of serial dishonesty (including kleptomania). Suddenly, neither woman seems particularly worthy of empathy. Things get worse at a technical level. In a long apartment sequence in which Brooke whines to an ex-boyfriend for money to start up a restaurant, the lighting is forced; the sound echoes. An unwanted home movie side emerges.

Co-writers Baumbach and Gerwig say they were out to make a comedy, but this is something else. The film’s intended fun and lightness, like its object lessons, prize a savage side. “You are much more of an asshole than you initially appear,” Brooke tells Tracy. So is the movie.