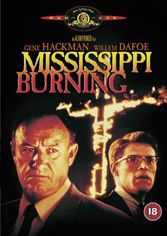 Willem Dafoe and Gene Hackman are durable and immensely compelling opposites in Alan Parker’s often-heartbreaking examination of early 1960s segregation and its violent consequences. FBI agents Anderson (Hackman) and Ward (Dafoe) are fictional characters, but the murders of three young civil rights workers while trying to get out the 1964 vote — the story at the heart of the film — did occur and tore apart the country. Dispatched to Jessup, Mississippi to investigate the case, Ward is quietly indignant, while people’s man Anderson sneers at the fuss. Together, they’re drawn into the tawdry but fiercely defended circumstances of day-to-day racism.

Parker parks Dafoe behind his glasses, insisting that he smolder, which he does with resentfully dark majesty. Hackman ranges over the bigoted landscape until he understands that the submissive local deputy’s wife (an exceptional Frances McDormand) holds the key to the case, and that makes him feel for her.

Parker documents the cultural “attractions” of racism, including its centuries-old buddy system. He also delves into black omertà, a brave expedition. Only his too-facile overlapping of reality and Hollywood, climaxing in too big a bang, marred the enterprise (Hackman was called on to defend it on talk shows). Still, it ranks among the worthier mainstream projects of the 1980s.