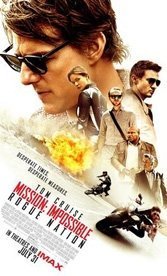 What to say about a “Mission Impossible” movie (the fifth) that includes a female agent called Ilsa Faust? That she isn’t what she seems and rides a mean motorcycle? And may or may not work for a nefarious chaos-making rogue agency called The Syndicate? Writer-director Christopher McQuarrie’s take on the Tom Cruise-driven franchise contains few thematic surprises but as always you see some of world, digitally or otherwise: London, Vienna, Casablanca, and Havana.

This time around Ethan Hunt’s MI force faces imminent disbanding by a skeptical CIA chief (Alec Baldwin) who considers it insufficiently transparent, a pun of sorts since secret branches aren’t exactly known for transparency. Enter Ms. Faust (Swedish actress Rebecca Ferguson, unconvincing) and her ostensible boss Solomon Lane (Sean Harris, convincing), a former MI6 operative attempting to engineer a “global conspiracy to destroy the system…” — whatever that is. The CIA-hunted Hunt much likes Faust, much dislikes Lane, and he his patchwork band of reconvened brothers intervene before things get out of hand, which in this franchise means ensuring global “repair” proceeds at breakneck speed, car and motorcycle chases included.

McQuarrie pays little mind to his shopworn characters — aside perhaps from giving a little extra zest to Simon Pegg as computer whiz Benji Dunn. Irony is rife. Benji to Ethan after Faust misbehaves: “She just tried to shoot me!” Ethan: “That doesn’t mean she’s a bad person.” Of course not, since action flicks thrive on making light fun of themselves, if not their genre — and MI is no exception. It’s mayhem in great good fun, and there’s never the slightest doubt about the fate of the good guys, with Faust ultimately relieved of both her burden and bargain.