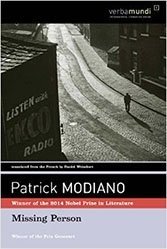 By Patrick Modiano, translated from the French by Daniel Weissbort

It’s 1966 in Paris, a gloomy city still hobbled by the shame of Nazi occupation and Vichy collaboration. Guy is a private eye whose boss, Hutte, is retiring, closing down their agency after a decade. But Guy is a man burdened with a permanent puzzle. He’s an amnesiac Hutte conferred with an identity and job to paper over a patchwork past. Now liberated from his fake self, Guy finally wants to uncover “my former life” and how he found himself in Paris, details lost to amnesia.

Modiano’s darkly brilliant thriller about the perils of recollection is a trip through cold, dark Parisian streets, real ones and those embroidered by Guy’s mind that seeks to populate the past with all manner of “hurrying shadows.” Each bit of research — photos of strangers into which inserts himself — leads Guy backward, into occupied Paris, the half-lives of Russian émigrés, of would-be aristocrats, of diplomats from the Americas who were diplomats in name alone, their papers and identities faked. Like “a water diviner watching for the slightest movement of his pendulum,” Guy claims each person he thinks might have been him as his long lost self, but only until he comes up with a more plausible alternative. Slowly, his detective work yields results, but even these are little more than an ambiguous meshwork of wartime trauma from which Guy — or Freddie, or Mr. McEvoy or Jimmy Pedro Stern — can sculpt no one self. Might he have tried to escape from Vichy into Switzerland and caused the death of his lover? The answers are yes, no and maybe.

Modiano, who won the 2014 Nobel Prize, handles psychological claustrophobia as if he alone knew its Parisian code. Nothing is sure. No one remembers reliably. Identity is either indistinct or ephemeral. People themselves are “steam which will never condense.” This is Paris portrayed in the vein of the Vienna of Harry Lime in “The Third Man,” with zither players, homosexual bars and mysterious dames inclined toward suicide. Modiano’s Gay Paree is all grime, a place where no one wants to think too hard, lest they’re asked to remember the fate of “vanished people,” the gateway to vast guilt. Published in French as “Rue des boutiques oscures” (lifted from Rome’s Via delle Botteghe Oscure), it won the Prix Goncourt in 1978.