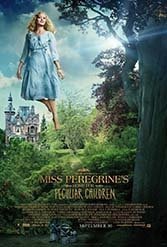 Anticipation is high for any new Tim Burton film, and his latest, “Miss Peregrine’s Home for Peculiar Children,” based on a Ransom Riggs young adult novel, is a must for fans. For the rest, this mash-up of fantasy, sci-fi, comedy, melodrama and horror may be less than satisfying.

On the basis of bizarre bedtime stories told by his grandfather Abe (Terrence Stamp), protagonist Jake (Asa Butterfield) finds his way to Miss Peregrine’s “home,” a Victorian edifice in Wales that houses the peculiar children. The residents exist in a pleasant but rather confining time warp, condemned to keep repeating the day September 3, 1943 (à la “Groundhog Day”) or suffer the tragic consequences of a wartime event that will occur (indeed, has occurred) the following day.

One theory is that the “unwanted children” are escapees from Nazism, a take that would explain the villains of the story being called “hollowgasts,” a not-so-subtle reference to the Holocaust. In Abe’s telling, the children are unwanted because they have peculiar characteristics (one girl isn’t subject to gravity). The revelation of these characteristics, which prove useful in the ensuing conflict with the forces of evil, is both entertaining and formulaic. Miss Peregrine (Eva Green) is peculiar, too; she’s a paranormal scientific management type whose task is to keep her brood safe by monitoring the September 3 activities. Lines about the dullness of Florida (a stand-in for the Burbank of Burton’s youth) are good for laughs.

The screenplay tries at once to be classic love story and a mystery cloaked in time travel. The 10- and 8-year-old grandchildren viewing the film followed the time-loop sequences more easily than the adults, which may say something about the target audience.

Green is a believable, avian Miss Peregrine, Samuel L. Jackson is perfect as the scene-eating villain. Butterfield — our hero — seems too bland for his role, and Judi Dench is wasted in a cameo. Allison Janney has a nice turn at being a cloying psychologist.

Burton’s movie is a frothy, over-the-top, and occasionally irritating pleasure, used in part to show off his animation skills. It no doubt will be nominated for a slew of technical awards. he grandkids gave it four stars.