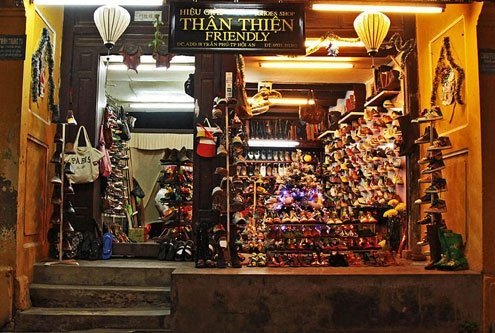 Check before you do your clothes shopping.
T

he morning was in full swing by the time we pulled into Hoi An, a Vietnamese coastal city on the South China Sea. The chaotic traffic that had shocked me in Ho Chi Minh City was just as present here, as was the heat. My friend Kim and I had read about charming, well-preserved Hoi An and we’d decided to stop on our way north to Hanoi.

Once a bustling Southeast Asian port, Hoi An, population 120,000, boasts architectural styles that range from Chinese to European Colonial (for centuries, the city was a favorite of Chinese, Japanese and European silk merchants). The city’s unique look has earned it UNESCO World Heritage Site status — “an outstanding material manifestation of the fusion of cultures over time…” — and transformed it into a popular tourist destination.

Compared to Ho Chi Minh City’s low cement sprawl and bird nests of tangled wires, Hoi An lays on the charm. Old wooden houses line up along narrow lanes, with red paper lanterns hanging on the streets near the Thu Bon River by night. It’s what a Westerner might imagine as the typical Asian scene. Locals ride bicycles wearing conical hats; slender rowboats push out into the silt-thick water.

But Kim and hadn’t just come here for quaint architecture. We’d heard that Hoi An was famous for tailor-made shoes and clothing. We imagined a new wardrobe replacing two months of old backpack apparel. What we didn’t expect was to be shopping so fast.

Just your size, said the shops. Any color. Any way you want them. The choices and possibilities dazzled us. One corner down from our hotel, we picked a shoe off a rack and a cheerful young woman ushered us inside. We emerged a half-an-hour later having ordered three pairs of sandals, just our size, in our chosen color.

Kim suggested we buy now, so they’d be ready for our departure. I agreed. The prices were also absurdly low.

Around the next corner came dresses, shirts, skirts, and pants. The same mantra held: any shape, material or color. Outside one store, black plastic torsos lined up beside popular Western-style designs. Again, we stopped to admire. Again, we were ushered inside.

This time, the woman in the tailor shop was alone. She was in her mid-30s with a black bob. She sat us down across from us on a couch, offered us tea, and told us that she owned shop.

Kim, who had experience as a seamstress, asked her about the practical side of stitching, and the two of them began talking about cuts and hems, and finally about why we’d walked in: we’d both liked a certain dress. After the chitchat we were sure we’d put ourselves in trusted hands. She’d surely make us dresses that fit and were on the better side of perfect.

She took our measurements, writing down our numbers — arms, shoulders, waist — in a small notebook, and told us to come back the following morning to pick up the dresses.

That night, Kim and I ate pho (noodle soup) and drank beer on low wooden stools besides the river. The red paper lanterns floated above the bridge in the dark. The tourists walked around in a comfortable murmur. Hoi An’s enchantment grew after dusk when the heat diminished. The night was long and plentiful, in food and drink. We woke up with hangovers.

Back we went down dusty roads, avoiding the shoe-shops and the sun, to where our dresses awaited. Once there, we carried the plastic wrapped packages to a room that might have been where the bobbed woman sewed, though there were no signs it was a space for anything other than living. We tried on the dresses in front of the mirror. Our excitement deflated quickly.

“Maybe if I roll up the sleeves, it’ll be better,” Kim said.

“Or tie it a little higher on my waist,” I said.

A few minutes later we’d stopped trying to convince ourselves the dresses could be worn. They hung like sacks off our different frames. They showed no indication of having been measured. But what to do — they cost a pittance? We bought them anyway. The shoes, which we picked up later that day, were a comfortable fit.

Only later did we realize we should have done our homework on “tailor shops” in Hoi An. According to any number of online sources, many of its “stores” are bulk sweatshops that produce cheap clothing for Western shops like Zara. Hoi An is chock with small factories of underpaid and over-worked people — the silent fingers behind engaging shop owners who tout themselves as tailors.

If I ever went back, I’d still hunt for clothes, but this time equipped with a well-researched list of reputable stores. Yet traveling is often about making mistakes and learning from them. Traveling is education. On the train to Hue Kim, I dropped ill-fitting dresses out the window.