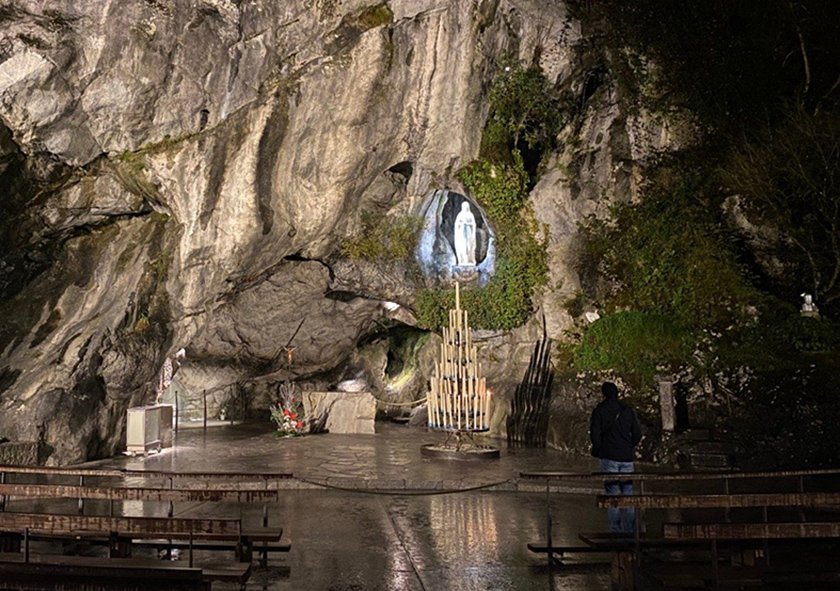 The coronavirus closed even the Shrine of Our Lady of Lourdes.
S

itting in a hotel room in Orlando, Florida on a Saturday afternoon in November, I find myself at the very epicenter of America’s most popular holiday resort and entertainment complex. My hotel has rococo architectural flourishes intended to make it resemble a Tuscan villa. Instead, it looks a lot like one of the many oversized glandular structures that dot this swampy landlocked landscape of flattened green.

I decided to escape here — to the most unreal and surreal place on Earth — to flee the seemingly never-ending American presidential election ballot count, which has now dragged out for more than two weeks, mostly driven by flimsy lawsuits that make unsubstantiated claims of voter fraud. In case you missed it, Donald Trump lost the election.

Yet what better place to seek refuge from the recrimination and finger-pointing that, as a political reporter, it has been my duty to cover. I have a balcony overlooking a manmade lake with several fountains.

I’ll say this about my pretend Tuscany: It’s quiet. That’s surprising since I’m just a couple of miles from the hub of activity surrounding Lake Buena Vista — a huge complex that includes Disney World, Universal Studios, Epcot Center, and Sea World. The villa is in a gated community composed of eight-story tall condo towers that surround the lake. I’m grateful for the view, the spa, the pool, and the poolside bar. I look forward to adult beverages and retail “therapy” at the nearby outlet mall.

I’m also here to visit my sister, who I spent little time with during my last visit — a very hectic birthday party she threw for her five-year-old son held at his grandfather’s hangar at a small commercial airport nearby. Everyone was distracted by the air show, especially the Blue Angels, as they flew in formation, performing stunt aerobatics just over our heads.

My fake Tuscany has nothing in common with the real thing, which I had planned to explore on a trip last spring. But the coronavirus pandemic had other plans, both in Italy and the United States.

Domestic travel, no matter what precautions I stringently follow, poses a high risk I can’t and won’t put aside.

As a second virus surge now sweeps through both Europe and the U.S., I don’t know when travel, both international and domestic, will again be possible.

In my mind, domestic travel, no matter how safe I am or what precautions I stringently follow, poses a high risk I can’t and won’t put aside. Infection rates and death tolls are rising throughout the country.

Cities and states are again imposing curfews, limits on indoor dining, and full-scale lockdowns. I recently canceled a trip to a mountain cabin in North Carolina. Even here in my complex, I see too many people walking around without masks, even riding elevators, as if believing the pandemic has nothing to do with them. I sometimes cringe in anger.

So how to travel when you can’t? Maybe through reminiscence.

Just a year ago I was preparing to embark on what would turn out to be my last trip, to London, Paris, Basel, and Lyons. It seems like a long time ago now.

As I sit here in my room under the blue Florida sky, watching the fountain percolate over the fake lake, I wonder how things are in Lourdes, and whether there’s still brisk business at the fountains outside the Sanctuaire Notre-Dame de Lourdes, and at the underground spring from which the blessed water flows.

I visited the French holy city two years ago with my girlfriend during the 150th anniversary of Bernadette’s vision. At the time, miracles weren’t in such short supply.

The Lourdes stop was part of a driving tour that took us north from Barcelona to Cadaqués to Toulouse, across the Pyrenees. We saw Andorra and Montserrat before doubling back to Barcelona.

Once in Lourdes, we looked for a place to stay, driving through the town center, past the Basilica of Our Lady of the Rosary and up a winding pedestrian-choked road. What we found was the funky Hotel Belfry, where a disco mirror ball hung above the room’s king-sized bed. There’s nothing like that where I am now.

The whirring of the fan distracts me from my escapism. It’s not Lourdes but Orlando.

Once settled in, we walked back down the hill to the basilica and wandered around, poking our heads inside the cathedral, filling up at the watering trough. We were told drinking the holy water would bring us good health and success in the coming year.

We also found a one-star Michelin restaurant a couple blocks up the hill from the hotel. Its location, inside a restored mansion on the banks of the Gave de Pau River, left us dazzled. So did Au Pois Gourmand, a restaurant we found in Toulouse.

But the whirring of the fan distracts me from my escapism. It’s not Lourdes but Orlando, and despite vaccine promises there are no low-hanging miracles.

Bustling Lourdes is locked down, as is Toulouse, much of the country’s wondrous food under wraps for who knows how long. France in fact has some of the strictest virus control measures in the world and the country has already been fully locked down twice since March. There are no pilgrims in the holy city, no one to collect and spread healing waters.

In July, Lourdes hosted the first ever worldwide virtual pilgrimage, digital ghosts transmitted through the Ethernet to celebrate the holy host.

That alone demonstrates how far we’ve retreated from the world we knew to a safer one we can better control. Life, once meant to be embraced and savored in full, is now experienced at arm’s length, our delight hidden by cloth masks. We are now separated from one another, our sense of wonder become a cautious stare into an unknown future.

It makes coming to America’s fantasy land for a fake dose of Tuscany seem all too reasonable.