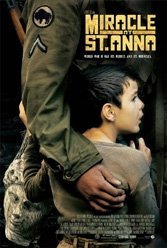 Easy to imagine Spike Lee wanting to tackle the subject of black GIs during World War II. Praise be to Spike. That he and Clint “Flags of Our Fathers” Eastwood traded barbs over which macho man better grasped history suits ill-tempered times. Spike bashed Clint for failing to include blacks and Latinos in his Oscar-winning Iwo Jima epic. Clint snarled back that his storyline owed race no special favors.

The froth matters because Lee’s account of a black squad in Italy, while sincere and well-drawn, drives at race with a vengeance. This is a compensatory movie, the kind that loudly and self-consciously fills a void. It’s true: American filmmakers largely omitted minority contribution to the war; Lee sets out to preach the breach closed.

The flashback-laden plot concerns ties between the Army’s all-black 92nd Division — the so-called Buffalo Soldiers — and Italian partisans in Tuscany. The bond between the villagers and the mixed-race troops trapped behind enemy lines is homage to the Melting Pot and divisions within it.

But a heavy-handed “save-the-little-boy” subplot does the movie no favors. Nor does sexy Renata (Valentina Cervi), the “I’m Italian, so just-let-me-just-take-off-my-clothes” partisan. Actors Derek Luke, Michael Ealy, Omar Benson Miller and Laz Alonso do their best to keep Lee’s caricatured narrative chugging along. But 160-minute chug is entirely too long to state the obvious, let alone to proselytize on a grand scale. The proven war movie formula is run-up, battle, afterword. Lee’s insistence on jamming in the 1980s (his favorite decade) just muddies the story.

Heavenly overtones added, the story is based on the August 1944 massacre of 560 Italian villagers by Nazi troops in the town of Sant’Anna di Stazzema. Here’s Under the Wartime Tuscan Sun, with tough love from Spike.