Mio fratello è figlio unico (My brother is an only child) 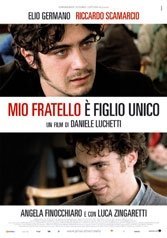 Directed by Rome-born Daniele Luchetti, this well-crafted film is based on a novel by Antonio Pennacchi and uses the point of view of a young son to follow lower-middle class family life in the 1960s and 1970s in Latina, a Roman suburb.

The perspective comes from the awkward but endearing Accio (Elio Germano), who starts in the seminary but leaves to joins the growing neo-Fascist movement — in part to vex his leftist-oriented parents. His handsome older brother Manrico (Riccardo Scamarcio) follows the “truer” path: He’s a factory worker and Communist who uses his activism mostly to woo women.

Vittorio Emanuele Propizio does a superb job as the adolescent Accio, who is insolent and confused. Propizio’s body language fits perfectly with Germano’s mature version of Accio. Luchetti also pulls off an excellent transition from younger to older Accio: Manrico dunks his brother’s head into a water-filled pig trough; it enters as a boy and emerges grown up. The period-piece details — cars, costumes, 1970 politics — are all well-handled. This is a nostalgic coming-of-age story about the hardships and joys of Rome family life.