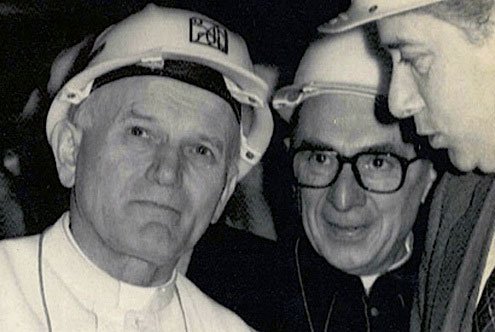 The former Krakow archbishop reveled in mountains and mine shafts...
T

his is Rome’s season of impatience. Resplendence matures storms. Autumn bruises the sky only to settle back into its armchair. Cowering at thunder, I sift through bills made onerous by the rise of Europe’s currency at the expense of America’s brittle dollar, too weak to fight back.

On my desktop I have an unlikely photo of Pope John Paul II in a miner’s hardhat, taken in early 1980s at the height of his allure. Unlike his German successor, who resides in Roman Catholicism’s prepackaged ivory tower, the former Krakow archbishop reveled in mountains and mine shafts. My mother, a reluctant Pole, put it well. They were both born in 1921. “He’s no longer locked up,” she said. “You can’t even imagine.”

No need. He was a schoolboy at recess. He frolicked ahead of his time. Benedict, the German scholar, is more insular; his papacy is among the least dynamic since Pope Paul VI’s. Josef Ratzinger is an able shopkeeper on a planet hungry for salesmen. They are incompatible roles.

Yet he does his job: he decries the corrupting influence of materialism and its effect on thinning spirituality. He worries about marriage.

If he’s lucky, they’re listening in the Philippines.

They aren’t in the new world I come from.

From there I hear of another divorce. The latest couple lasted long enough for the wife to bear a child, now three-months-old. The husband returned home one day and said he’d had enough. Of what isn’t clear. And left.

Distraction is the only satisfactory explanation. Refreshment (input is the word) is a double-edged sword. In relationships, distraction yields dissatisfaction which rationalizes escape. Stimulation is incessant. Uploading and discarding are a continuum. The labor of longevity, measured in discipline, is superfluous.

I scan a newspaper column by a successful American contemporary who expresses surprise at the political passivity of his daughters, whom he lumps into “Generation Q” — the quiet ones. “America needs a jolt of … idealism, activism and outrage” by twenty-something’s, he writes, “but they can’t email it in.” Look at Bobby Kennedy, at King, he says; Facebook won’t cut it; you can’t download activism.

At the same time I read an article about university admissions which reports that many applicants have taken to sending emoticon-laced thank-you mails following interviews. “I’m the one you want,” they say. Nice try, say skeptical officials. What’s interesting about the messages, the report suggests, is the “longing for authenticity” they represent— ironic of course since contrived genuineness is a paradox.

But few notice. Material success and contrivance are inseparable. The road less traveled is to be avoided. Peril is for losers.

Which of course is where crisis kicks in. The competitive workplace is by nature inauthentic. Its strictures work against the yearning that underlies originality. Unoriginality in turn urges conscientiousness into self-promotion, where it has an Internet channel that doubles for proficiency. Conflict awakens in postings. I send therefore I am. Today and now. Tomorrow may bring amnesia but it hasn’t happened yet. Life is in the moment, intense and unburdened by context.

My columnist colleague, who embraces the ascent of global technology (he honors its democratizing impulse), should know the dimensions of this monster. Postmodern dissent fits more conveniently in a billion antiseptic blog jars than on the street, where arrest can turn actual, and brutal.

Only Burmese monks, the least imaginable global warriors, swarm the streets at their own risk. They’re old school. For some, harm’s way is both literal and necessary.

Not in the West. It’s dysfunction is compliance. Dissent, distracted, won’t sacrifice profit; dissatisfaction, inchoate, will dissolve any and all ties. In this sense, many-times dead Karl Marx is due for resurrection.

Marketing is the opiate twenty-something’s swear by — the hypnotic manufacturing of merit. The Internet is its amoral nutrient. Protest is an “I have a dream” joke.

“Virtual politics is just that — virtual,” groans the columnist. “Generation Q may be too quiet, too online, for its own good, and for the country’s own good.”

To which one student, a woman named Melissa, responds: “As a twenty-something, I’d like to express this unfortunate truth with which I live: in a world built to make sure I succeed to the best of my ability, I am also warned to be cautious.”

“Sell a man a fish,” writes Marx, “he eats for a day; teach a man how to fish, you ruin a wonderful business opportunity.”

Affluence is not art. Ingenuity is non-eccentric. Eating for a day, for a year, is its dream. Gorgeous, pulsating toys make a new breed of sellers believe they’re a part of a delivered caste.

But who will? Why bother? Should a fisherman even get ahead?

Imagine a Polish pope. Think of him wearing a miner’s hardhat.

But no, popes don’t do that. Can’t happen. Why should it?