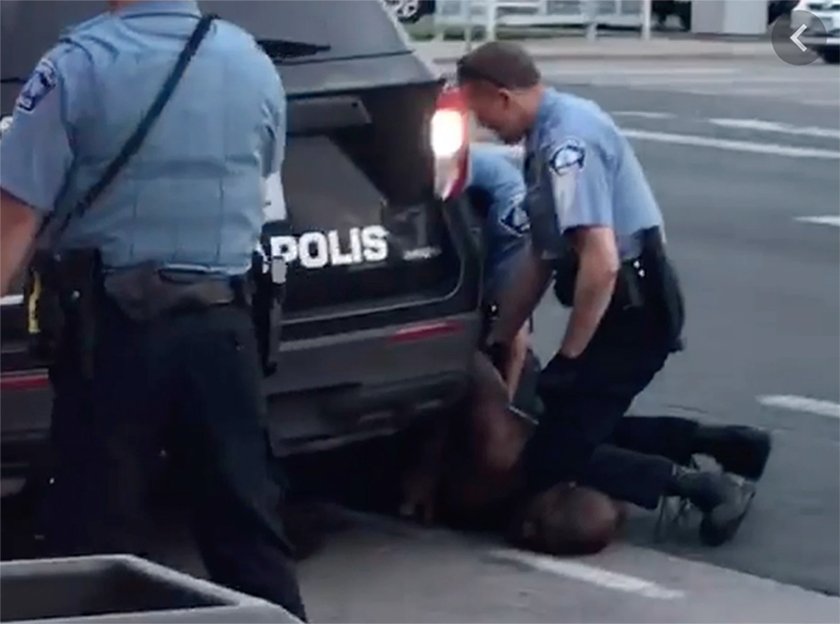 Too much power, and in the wrong hands...
A

man is crouching with one of his knees on the neck of a second man who is in handcuffs on the pavement. Some of his colleagues are also there looking on. Is his expression one of rage against someone who may have hurt him in some way? Not really. His expression is surprisingly blank. The man’s victim is crying out that he can’t breathe. The kneeling man is unmoved by these pleas, not reacting. Entire minutes go by: eight full minutes. The crouching man maintains his position and his colleagues maintain theirs as onlookers. There are no outbursts, no screaming at the victim, nothing. What is the kneeling man thinking? We can only guess.

One imagines that, at the very least, he might be considering the possibility that the hundreds of angry people on the fringes of the scene have phones that can take video footage of what is occurring. But if so, if this had been his concern, he would likely have sought out a more secluded spot to carry out his deadly mission, inside a police wagon, perhaps.

Maybe he feels completely removed from any reprisal, from any possibility he might be taken to account for his actions. Maybe the presence of his fellow officers provides him with a protective circle, a shield of sorts. Could it be that he is used to such incidents being overlooked, maybe with a friendly, macho pat on the back? A “don’t worry, we’ll take care of it, you’re a good cop, just don’t get carried away next time.” This of course is pure conjecture. But one can’t help but wonder if this man has done similar things before.

Could it be that this violent policeman is used to such incidents being overlooked?

If one has the stomach to watch the entire video, they might see more than I do. All I can make out is a very cold, detached face of one man taking the life of another.

He could be a carpenter holding down a board, though probably a carpenter would not be so emotionless.

Watching this scene unfold chilled me to the bone. The killer and the dead man have names, by now well-known ones, but identifying them is not my point. It is the incident itself that matters.

In another scene an older man is seen walking along, possibly angry, possibly shouting. He is unarmed, unprotected. A mass of officers walk toward him, armed and armored. One of them pushes him and he falls to the ground. Blood begins to leak and he is immobile. One officer instinctively moves to see how he is, but the one who has knocked the man down pushes him back and away. The others see all this but care not, or dare not to lift a hand to help the bloodied bystander.

There are psychopaths in the world, and many tend to be attracted to positions of power, those able to maintain some grip on conventional reality, as yet not serial killers. There are some in all fields, and not only the police. They include professions that by nature grant physical or psychological power over others: psychotherapists, doctors, teachers, chiropractors, prison guards, religious leaders, business executives. This hardly condemns those professions. The less disturbed of these abusers openly use their power and disregard the consequences. The more severely disturbed are even more dangerous, immune to tears, cries of pain, lacking both empathy and remorse. If they are armed and protected, they can inflict lethal harm. Such people, whatever their vocation, have no doubt been victims of horror themselves, but that’s not the question I wish to address here. They may also have been exposed to too many violent crimes in their profession – I can imagine such callouses inuring a person to the pain of others. But again, that’s not the issue either. The question at hand is why they are allowed to continue.

It is not surprising that they do what they do. What is surprising is that are they not weeded out from police, from schools, from retirement homes, from churches and professional organizations. For violence to occur, people need to look the other way, whether in the family, in institutions, or on the street. Some of the violent are themselves severely traumatized, psychologically undone, maybe even psychopathic.

Those who are singularly cruel can carry out these actions because no one intervenes.

But what about those around them? Let me put it more plainly. Those who are singularly cruel and heartless, those who, armed and in full gear, can knock an unarmed old man to the ground, or place their full body weight on the neck of a handcuffed man for eight full minutes, can carry out these actions because no one around them intervenes to put a halt to things.

The militant Black Panther movement of the 1960s used the phrase “If you’re not part of the solution, you’re part of the problem.” And the social psychologist Philip Zimbardo showed how evil deeds often happened because good people did nothing to stop them. The question of why some of those in positions of power are sadistic and remorseless is important, yes, but more to the point — and a question that so far remains unanswered — is how to get good people to speak out, in other words, how to get the “good cops” to isolate the “bad cop” so that such appalling behavior can be called by its right name — needless, vicious brutality – and things can begin to change.