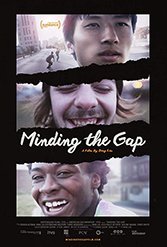 Skateboarding is the ostensible theme of this award-winning documentary by first-time director Bing Liu. And while the skateboarding scenes are thrilling and exhilarating (even scary), that’s hardly the entire story here.

Liu began filming his skateboarder friends 12 years earlier in economically depressed Rockford, Illinois. There’s Zack, a 23 year-old slacker who’s just gotten his girlfriend Nina pregnant; Keire, a black 11 year-old; and Liu himself, a Chinese-American, all outsiders of a sort, who’ve rejected or have been rejected by their families and traditional high school cliques. The three consider themselves a family, and to some extent they are, but these young men – apart from their love of skateboarding – have very different lives and goals.

What Liu films in the end is a tale of domestic abuse, particularly his own – from a stepfather and his passive, enabling mother, also abused by her husband, as well as a stepbrother who bites his tongue. There are hints that Keire’s mother may have an abusive boyfriend. The domestic abuse unfolds at first from Liu’s real-time filming of Zack and his girlfriend, now young parents, as well as interviews with them. An interview with Liu’s mother is the emotional heart of the film. He’s unfearing in his questions of her, until he finally shrinks from his own camera.

“Minding the Gap,” nominated for an Oscar and winner of more than 50 awards, is raw, in both its emotions and its filming. It’s the work of an inexperienced filmmaker, especially at the beginning of his 12-year process in making the documentary. Yet that rawness is also a strength. Liu and co-editor Joshua Altman deserve praise for understanding in the end what all Liu’s footage—including his skateboard footage–was about: the pleasures of speed and risk, to be sure, but also the bond of friendship and, above all, the flight from the emotional toll of rejection and abuse.