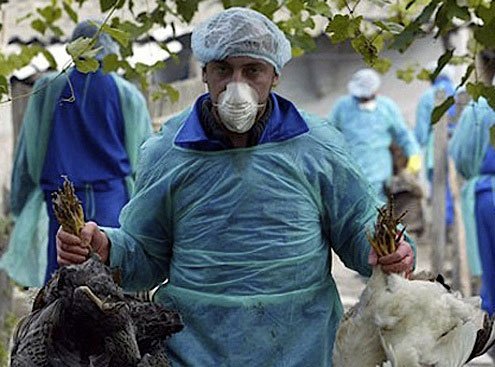 The flavoring of news with menace has turned into a magically successful business.
I

Before that came “Flash,” ripe with (explosive) possibility.

Breaking News is different. It fractures intentionally. It is not neutral but detrimental for effect.

Not that easy, I answer.

Anxiety conjures up its own lexicon. It delivers phrases that pick at sores.

For Breaking News, the latest sore is birds.

Are you at risk? asks Breaking News.

And what about your children?

What if drugs are limp and without potency?

You know about “superbugs.” They’re smart, adjust, are unresponsive to superdrugs. Like a hurricane, you think.

What if this is one?

Instructed to read, you do — and find discomfort:

Impossible numbers have their scrambling effect.

A novelist friend from New York City, responding to the Breaking News, dashes off a three-word email that is pure (if inadvertent) Hitchcock:

It is as Joan Didion writes: “We are open to the persistent message … that if death catches us we have only ourselves to blame.”

The flu terrifies because it’s familiar, the perfect harbor for vicarious worry, both imaginable and medieval. In the feral mind — and feral it is, literally — birds — from Romania, from Turkey — infect perniciously. They contaminate cities and make Europe into a warren for the diseased.

In the 17th century, Daniel Defoe lamented government secrecy about the encroaching plague — “they had a true account of it … but all was kept very private,” he says in “Diary of a Plague Year.” “We had no such thing as printed newspapers in those days to spread rumors and reports of things, and to improve them by the invention of men … things did not spread instantly over the whole nation, as they do now.”

But the existing pandemic is anxiety.

The virus that has sickened at least 20 to 40 percent of the world’s population is centralized apprehension.

Its messenger is Breaking News.

Which is its own best friend. “If death catches us we have only ourselves to blame.”

Cometh hyperbole. One United Nations health official projected a pandemic death toll at between five and 150 million people — he called it “a combination of global warming and AIDS,” a too-perfectly sinister remark. A second official then ridiculed the first. Two to eight million, he corrected.

Ah, you say, another media basher.

But since September 11, the transmission of bad or menacing news (or flavoring the news with menace) has turned into a magically successful business.

Mad cows are just a little madder; clucking chickens that much more lethal.

There’s a pathological price to pay, however.

A medium that successfully sells “breakage” by installments has no choice but to reprise and refresh the product line: Katrina energizes Baghdad which yields to Rita that then moves on to Kashmir which recedes for noxious fowl.

A public whose global gossip network depends (outside celebrity) on its obsessive response to real and synthetic drama will seek out calamity. In that sense, Breaking News is a supermarket and avian flu merely the latest shelf item.

Yet exaggeration is an ancient indulgence. It is not the danger.

The inability to reason with it is.

And that’s when the birds get toxic.

The word “emergency” again limbers up — a bad sign. In Italy, the daily Corriere Della Sera announces out of the blue that the world is “holding its breath,” dreading the avian flu more than terrorism. It cites “polls.”

At one point Defoe’s fictional narrator asks his brother whether he should leave stricken London. “His answer was in three words … ‘Master, save thyself.’”

But superstitions endure even into illuminated times. Three words then, three words now.