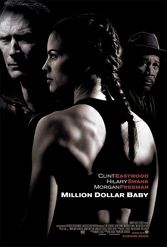 Not the classic its admirers pretend it to be, this gender-bending boxing story starts promisingly only to collapse under the weight of saccharine morality. Hilary Swank is Maggie Fitzgerald, a trailer-park-trash boxer who begs testosterone-laden trainer Frankie Dunn (director Clint Eastwood) to take her under his wing and make her a contender. She enlists the support of his hack gym manager, Eddie “Scrap Iron” Dupris (Morgan Freeman), who mumbles laconic encouragement.

Maggie ascends in Rocky-like style, bashing her stunned opponents while demonstrating that the female work ethic is every bit as heartfelt as the male and winning over the crusty Dunn in the process. Cometh the title fight, which unravels into a visual hate crime. Suddenly, Maggie is on a respirator and Frankie, a laconic coward, is faced with life-and-death questions. The film then veers into a maudlin take on do-the-right-thing and euthanasia. By the weepy end, Eastwood has altogether dispensed with character in favor of preaching. It’s too bad because Maggie’s an interesting if improbable creation.