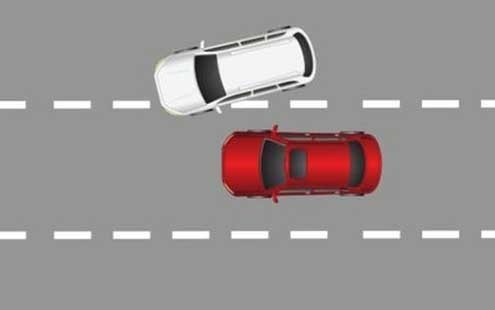 A swerve can turn into a morality play.
T

hese are divisive times. Humans quarrel and pick fights. Consensus is hard to come by in society and politics alike. So are shared experiences. Everyone wants unique experiences. That’s where driving plays the great leveler.

I’m a fairly new at it, so I’m still in the excited phase. I’m 22 and numbness has yet to set in. Before it does, and in the spirit of universal storytelling, let me share a couple of “I know what you mean…” driving scenarios.

1. I’m driving along peacefully when the person in the adjacent lane suddenly honks. I realize that I’ve accidentally drifted toward them. I immediately correct my trajectory and return to the center of my lane. But the story doesn’t end there.

All at once I’m inundated by guilt. In a snap, I’m not just anyone. I’m the chick in the white Nissan Sentra that swerved at mile 37.12. The world knows me, or will know about me soon.

All my life failures rush into my head. Of course I swerved. After all, I couldn’t even make one of those pretty macaroni necklaces in third grade.

I look around at the other cars, suddenly sure that the soccer mom driving the Dodge Caravan just scoffed at me in disgust. Looking back at the person who just honked, I can sense a look of repulsion for subhuman swervers like me. And if someone in a beat-up 2001 Camry with a license plate that reads GR000VY can look down on me, things are bad.

How easy it is to forget that a simple swerve can make you into such a heinous creature.

At this point, I’m desperate for eye contact with someone, anyone who won’t look away in abhorrence and contempt. But I find no one. And so, knowing that three out of five people will go home and tell someone about the “insane girl in a Nissan Sentra who swerved at mile 37.12,” I keep my eyes glued to the road, trying to leave it all behind by inserting myself into a new pack of cars, one that hasn’t witnessed me at my lowest. I console myself by trying to downplay my anxiety. Maybe I made it up. Maybe the soccer mom was scoffing at Johnny’s juice box mess. Maybe no one really noticed. Not likely, I think, since the shame I feel is deserved and real. Why shouldn’t other drivers want me to wallow in it?

2. To offset the shame of swerving, let me turn to compassion and empathy. We all know some of the most remarkable examples of these redeeming traits occur on the road.

First, I need to set the scene. A jerk (no doubt driving an electric blue convertible Corvette) has the audacity to break basic driving rules by passing me on the inside. The rules don’t apply to him of course. The shock of it makes me slow down. This in turn catches everyone’s attention. For a second, they might even think I’m in the wrong (and we’ve already discussed the shame of that).

Next, after gesticulating at me, the Corvette moron speeds up and does the same thing to someone else, making his arrogance evident to all.

This is when the good part kicks in. Arrogance elicits solidarity. When I come alongside my fellow victim, I shoot the driver a look that says, “I know. I saw. I witnessed.” Suddenly it’s a win-win situation.

Let me explain the dynamics. If I’m victim no. 1, my empathy vindicates victim no. 2. I’m their witness. If I’m victim no. 2, I appreciate the compassion and my self-esteem is restored. Someone saw the egregious event and will pass down the details of morality play to their grandchildren. The little glance (apologetic eyebrows included) wounded drivers exchange is proof humanity is alive, well and always ready to take on jerks.

Drivers can also be a forgiving lot. A rookie mistake sometimes produces not shaming but a tolerant nod that seems to say, “Fret not, my child, you are absolved and all is forgiven – at least this time.” Conferring forgiveness can also help gird a driver against their own future mistakes.

Sometimes, though, drivers are in their own universe. I’ve been on the receiving end of compassion-seeking looks (think post-swerve) but responded with an empty gaze, as if to say, “Sorry, man, I really didn’t see. Peace.”

Soon, all I’ll need is a plate that reads GR000VY.