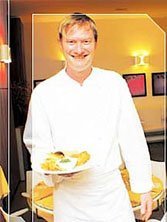 oreigners who adopt Italy as a home often cite love, cooking and culture as three basic reasons they made the choice. An Englishman from Exeter, Alistair Parkin seems to embody this kind of Italian Dream. He moved to Italy, married, became a cook, and opened a successful restaurant.

The evolution of Parkin’s remarkable career sounds like a case study in chance. “Nowadays, when you go live abroad, you’ve either got to work as a barman or as an English teacher,” says the 32-year-old Parkin. “And I had no interest in working in a bar. So I thought, ‘Right. I’ll teach English.’” But the waiting list for the TOEFL exam in England was so long that Parkin decided to take it in Italy, where he arrived in 1993. Some fortuitous mixups — including a wrong phone number — landed him at a school in Milan rather than Rome, where his sister was living.

He smiles and shrugs his slim shoulders. “I didn’t even have the money to travel down to Rome, so I stayed here.” Lucky for Milan.

It’s hard to reconcile the image of a struggling young teacher with the Parkin of 2004. In April 2003, he opened Alistair’s Vini e Cucina, an uncon-ventional attempt to mix a traditional English fish and chips menu with the Italian tradition of branzino con patate e porcini. Eighteen months later, crowds line up for his Sunday brunch in the Manhattan-style Porta Venezia district. Italian diners have supplanted English expatriates as his best customers, with many of his finest dishes now authentically Italian. He offers excellent Chiantis and Barolos alongside English beers such as Bishops Finger and Scotch Premium Lager. Oh yes, reservations are recommended.

Parkin never even intended to stay in Italy. “I just wanted to come, do my course, and then take off to China or Japan. I never envisioned staying in Europe. I wanted to travel,” he says. And cooking wasn’t even on the radar. “It was something I enjoyed doing, but only at home. I liked to cook for my friends. I liked to throw dinner parties. Nothing more than that. It was very personal, you know, and simple.”

An Italian woman changed his outlook. “I met Marilena at a party thrown by the school I was teaching for. Then she became my student, and you can guess the rest: We broke the golden rule.”

If love realigned Parkin’s priorities, a new kitchen in a new home transformed his ambitions. “In 1996, Marilena [moved] from a tiny little flat where there wasn’t even hot water in the kitchen into a larger apartment where I spent a fortune on remodeling. Most of my money went to redoing the kitchen. I turned it into a very fancy space. That’s when we really started inviting people over.”

But the entertaining didn’t turn Parkin into an aspiring professional cook. It took paella for him to see the light. “One night I decided to do paella. The funny thing was I didn’t know anything about shellfish. I just had this recipe and decided to give it a go.” The cook can’t hide a smile of satisfaction. “They absolutely loved it. A couple of friends who had spent time in Spain told me it was the best paella they’d ever eaten.”

Post-paella, Parkin began taking his hobby more seriously. Catering was next. “I began attending classes at IPCA, which is now La Cucina Italiana, when I wasn’t teaching. I found that I was good at cooking. I really liked it. I started doing more and more dishes for friends. At a certain point, one of our friends put a colleague in touch with me. He asked me if I would be willing to cater a dinner for them. ‘I hear you cook better than my wife,’ he said. The dinner was a success and that’s how I got my start.”

His talent brought him an impressive clientele. He prepared private dinners for Milan’s more important personalities, including television’s Natalia Estrada. “I continued working for her up until she began dating Paolo Berlusconi.” Alistair smiles, “But that was the end of that. Naturally, he has his own cook.”

Private catering, though successful, wasn’t the answer. “At that point I had to make a choice. I had already stopped teaching. I was just doing the catering. But the problem with catering is that either you offer everything — food, cups, glasses, plates… all of it — which drives your prices up and up and keeps you from doing the small, fun things, or you can’t really stay in business. I realized that either I had to get into the restaurant business, or I had to start catering professionally. That meant cutting out all the little stuff, which was the true joy of what I was doing.”

Parkin admits a little nostalgia for the days when he could focus his talents on a home-cooked dinner for eight. “That was where I was doing my most creative cooking: stuffed de-boned quail and things like that. It was my Babette’s Feast. I’ve brought some of those things into the restaurant — the risottos, for example — but not the second courses. They just take too much time, and require an entire staff of professionals.”

Parkin laughs when asked how he got his inspiration to mix Italian and English cuisines. “That’s something that came from you guys. Journalists all told me, ‘You can’t make any news unless you start doing English dishes. That’s what we want to write about.’ That’s when I started re-learning English food. And I found it fascinating. Take fish and chips, for example. To an Italian, deep-frying a big piece of fish doesn’t make much sense. They never fry anything thicker than a sole fillet. I wanted to give people real fish and chips, something with a tasty, hearty batter. I remember when I showed my kitchen staff this thick piece of fish — a fish steak, really — and told them, ‘Right, we’re going to deep-fry this.’ They looked at me like I was nuts.”

Parkin’s Guinness batter, deep-fried fish and chips is now a staple item on the menu. Served together with a tall glass of English ale at a table that may also host several pasta plates, a bacon-wrapped steak filet with balsamic glaze and a Ceretto Nebbiolo wine, the meal becomes emblematic of the cook’s efforts to offer the best of both countries.

Finding traditional English prime materials can be tricky. “Bacon is difficult. I either have to bring it over from England myself, or buy Dutch bacon. Sausages are worse. Everyone loves English sausage, but I can’t keep bringing tons of sausages over. Now I have them made here. We do a nice leek sausage, for example. But the first time I told my butcher what I wanted, he just shook his head. Italian sausages are all meat. When I told him I wanted things like bread and milk in my sausages, he didn’t believe me.”

Although the idea of blending English and Italian cuisines is innovative, Parkin is reluctant to label what he does as experimental. “There are lots of places in Italy doing good fusion cooking,” he notes, “but they’re usually the places where you spend E120 a head. That’s not what I want. What I do may be novel, but only to a certain extent. I don’t go over the top.

“I just like to offer good food, done a little differently. And whatever I do, I try to do it to the highest standard possible.”

Ingredients (serves 4 as an appetizer or a light main course.

1. Cut the eggplants lengthwise into broad 1/2 cm. strips. Over medium heat, brown the strips in an empty pan with a dash of salt. Set aside.

2. In the same pan, roast the pine nuts, stirring regularly. Roast for 5 minutes or until lightly browned.

3. De-bone the grouper fillet. Cut the cleaned fillet into dice-sized cubes. Place in a pan with olive oil and shallot until barely cooked (3-4 minutes over medium heat). Remove from heat.

5. Roll the fish filling in the eggplant strips (roughly 2-3 tablespoons of fish per strip).

6. Make a basic tomato sauce, adding hot pepper to taste. (You can also use a plain store-bought tomato sauce.)

7. Heat a liberal splash of olive oil in a pan. Fry eggplant rolls 3 minutes to a side or until slightly browned.

For presentation, place heated tomato sauce on the bottom of the plate. Stack the eggplant rolls in a pyramid — three rolls side-by-side, then two crosswise, then one on top — on the sauce. Sprinkle each pyramid with roasted pine nuts and a little sliced mint. Top each pyramid with a sprig of mint.