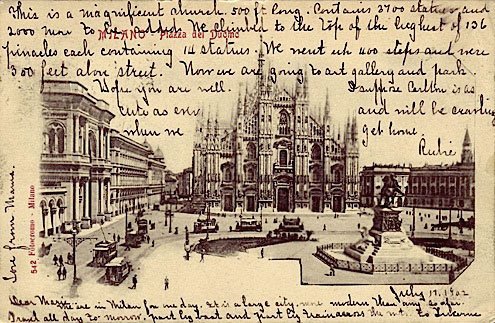 You're a veteran if you know the truth behind "panettoni" and can recall the bad old days.
T

wo items in the Milan section of Corriere della Sera recently caught my eye. The first announced the closure of the Marisa stores on Via Sant’Andrea and the second the comune’s decision to remove the rounded concrete pylons, known as panettoni that — in the name of traffic control — lurk stealthily below sight lines to the chagrin of inattentive or inexperienced motorists.

Usually news items in my column illustrate broader messages about Italy. These two illustrate the purely personal; just how long I have been in Milan.

I got here in 1992 after four years of living in Rome and Paris. Around the corner from my first Milan house, Marisa’s Via Sant’Andrea boutiques made me feel welcome, stylistically at least (Marisa’s Jack Russell terrier helped). Marisa brought young French and Japanese fashion to Milan. She combined these with local talents, offering a mix of lightly intellectual elegance, femininity, and Milanese practicality. This was refreshing after Paris’s fashion self-importance and Rome’s Dallas-style vulgarity.

Arriving in Milan from Paris, our taxi driver had a losing run-in with a panettone, which led him to update us on the political situation of our new home. After France, it all seemed almost titillating. However silly, the Lega Lombarda was — if nothing else — a new deck of cards on a very tired table. Tangentopoli seemed heroic and we’d rejoiced when French newscasters showed Antonio Di Pietro’s southern-accented courtroom harangues. The taxi driver claimed the panettoni were the brainchild of Paolo Pillitteri, then Milan’s mayor and crony of Bettino Craxi. And, guarda caso, the factory that made them belonged to Craxi’s wife…

It’s all much longer ago than I had thought.

I came to Milan with an open ticket. With no expiration date to mark my stay, I gradually lost track of time. Careening from one annual rite to the next — back to school, Christmas, Carnival, school vacation — my years in Milan became a single, thin layer of memory, until the Marisa and panettoni stories grounded me.

In the days following these events, other markers came to mind. Answer these correctly and you know you’re a veteran.

Question: What Milan institution formerly occupied the ground floor of the Armani store?

Answer: The Alemagna bar and restaurant. Its frayed pearl gray interior and glass cases with their gelatin-garnished canapés were a ticket to Antonioni’s 1960s Milan.

Answer: A butcher (now in Via dell’Annunciata, where the owners duplicated the Spiga store’s black and white marble interior); a cartoleria (subsequently a pretentious bar that never took off — the regular clientele remained faithful to the one up the street); a drogheria. Bonus points if you can identify the stores there now.

Question: What was the 94 bus?

Answer: The 96/97. Remember how easy it was? They went round the navigli circle clockwise/counterclockwise. Bonus points for knowing their directions.

Question: How do you reach items over the freezers at the Viale Piave Esselunga?

Answer: With the step stool and long-handled crook with a taped-up hook. Some skill required, so practice on relatively harmless items such as diapers and paper towels.

Question: Where were the original Prada stores?

Answer: It’s a trick; there was only one, in the Galleria.

Question: Who was “La Baldini”?

Answer: The chief obstetrical nurse at Milan’s Mangiagalli maternity clinic. No self-respecting Milan children came into the world without her “help;” except mine. For balking at the suggested 500,000 lire “tip” (in a public hospital), I was punished by having to spend the night — immediately after delivery — on a busy corridor on a gurney too narrow to turn on, too high to get down from.

Question: Where was the Via San Marco market?

Answer: In the traffic island in Via Montebello. It was a muddy tangle of lethal roots.

Question: Where could you get sushi 20 years ago?

Answer: In restaurants for Japanese tourists. That was easy. (Backup question: Name the first Oriental restaurant not requiring yellow-fever vaccinations or Triad membership. Answer: ATM — bonus points for knowing the origin of the name.)

Did you once admire Antonio di Pietro? Think about it.

Who was Bettino Craxi? If you know, who does he remind you of. And if you know that one, what’s it say about the politics of change in Italy?