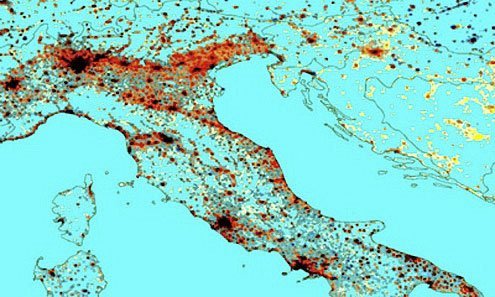 ome readers may remember my column from March 2006 in which I noted Milan’s origins as the Roman camp Mediolanum, “the place in the middle,” where Europe’s East, West and North South axes naturally cross. In that piece, I didn’t bother with the broader implications of geography and destiny, preferring to complain that my visitors rushed off for places whose geographic destinies offered more charming and typical Italian delights.

However, my recent exposure to the major urban re-developments that are changing Milan has made me more appreciative of the city’s own geographical destiny.

What was good for Milan under Rome was even better during the Industrial Revolution. Sitting on a geological divide, Milan is the peg between solid, mountainous terrain to the north and porous farmland to the south. Northern valleys provided hydropower for manufacturing; silk threads produced south of the city were woven and spun in the north. Trade routes good for foot and horseback worked for railroads. Cheap labor from other Italian regions arrived easily by train. Centuries of capital and commercial expertise could finance new industries. It is hard to believe today, but Milan may have more in common with Pittsburgh, Detroit or Akron than Rome or Venice.

However, Milan has performed a post-modern transformation that Cleveland, Detroit and Britain’s Midlands must envy. Remarkably, Milan hasn’t been hit with the social unrest and civic devastation inevitably connected to the decline of heavy industry. Few people today link the glamorous Milan of fashion, finance and media fame to steel, rubber, ceramics or pharmaceuticals.

But look at names of some of the “new” areas attracting the flashier — and cleaner — businesses: they are ex-Richard Ginori, ex-Pirelli, ex-Marelli, ex-Motta, ex-Falck. Over three decades, six million square meters of land where fumes once belched and waves of immigrant workers once flowed will have become parks, new residences and offices, schools and museums. In fact, the redistribution makes Milan the biggest cantiere in Europe, an ongoing construction site larger than the more obvious Berlin and sexier Bilbao or Barcelona.

Real estate movements this sweeping are guaranteed to be intermittently chaotic, controversial and corrupt. Familiar names such as Ligresti — he of the construction payoffs — have appeared. Planning for transport and infrastructure for Citylife (also known as the ex-Fiera) has been haphazard. Choices are perplexing. Why not draft local architectural talent instead of buildings designed by Zaha Hadid and Daniel Liebeskind, which look like recycled rejects from someone else’s urban projects.

But it is not as disorderly as it may seem. Milan has recently produced two master plans for growth. They’re the first such plans since the 1980s. Regardless of the partisan politics evident in the details, Milan planners agree that the city’s unique position is its trump card.

A planning atlas — titled “An Atlas for Milan” — published jointly by Skira, Assimpredil Ance (a construction and real-estate institute), Milan’s Politecnico, and the Comune di Milano helps make this case. Author Giovanna Fossa, who teaches architecture and urban planning at the Politecnico, uses satellite-generated images to map out the city’s functionality. One map traces high-speed rail connections between Lisbon and Kiev, Rotterdam and Genoa — both pass through Milan. Others show how major transport links feed into the city via smaller railroad networks and the tangenziale. Infrared imaging shows vegetation and construction hot spots, industrial spaces and parking lots. There are shots of traffic bottlenecks, neighborhoods in transition, and potential parkland.

“An Atlas for Milan” is fascinating and surprising reading. You can see that the Duomo lies on the border between the agricultural south and the industrial north. Railway and road connections are richer to the north towards fast-growing Brianza and Varese. A satellite image of light clusters extending from Turin to Venice confirms what any trip along the A4 suggests; that it links one of Europe’s most productive areas. The link between population growth and transport becomes obvious.

America and Asia may think Europe is headed for a museum shelf, with increasingly irrelevant cities such as Rome, Florence, and Venice in the forefront. But Milan isn’t among them. It grows on you. It’s like the underappreciated spouse in an arranged marriage, plodding along, dealing with whatever life throws at it. In this case, life threw it a good location that keeps it relevant, modern and even a little bit Italian. Geography is indeed destiny.