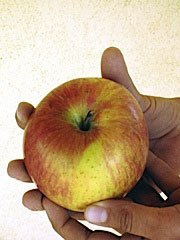 Buying "biological" — or ecological — is all about trust.
O

ne summer, when I was about 10, I became obsessed with the Guinness Book of World Records. Together with my brother’s penchant for slot-car racing and my sister’s yearning for her new (and first) boyfriend, our obsessions turned family meals into parallel monologues.

Recently, two news items brought forgotten fixations back to mind. Obituaries citing Luciano Pavarotti’s record for curtain calls (165) alerted me to the fact that the curtain call record I remembered best — held by Nureyev and Fonteyn — had fallen by the wayside. The second item was a New Yorker article (Aug. 13, 2007) about olive oil fraud, which naturally involved Italy. In my record-obsessed summer, I remember that the world’s largest fraud included cooking oil, salt water, Italian surnames, and New Jersey oil storage tanks (where else). Plus ça change…

Maybe I should worry more that my 40-year-old brain uses its shrinking memory so poorly. Instead I began obsessing over olive oil. I shared my concerns with a new friend, whose second career is offering a safe haven from food frauds (details later). As I browsed among the olive oils in his shop, he filled me in on scams that are even more disturbing than passing hazelnut oil off as extra virgin. Trawling the Internet only heightened my concern. The most widely-cited source in my search was a Legambiente study stating that Italian food fraud had jumped seven percent in 2006. Sadly, most of it originated in Campania, Molise and Basilicata.

Truffe (or frodi alimentari) take several forms. Some involve origin and expiration date — Chinese frozen fish promoted as local and fresh, for example, or canned tuna peddled six years out of date. It can also involve contamination by parasites or carcinogens.

There’s also abuse of the government-regulated appellations D.O.C. and D.O.P., acronyms awarded to products (prodotti tipici) made to legislated standards and linked to specific regions to suggest purity and authenticity. They’re priced accordingly, which can attract the ill-intentioned.

Since industrially-produced foods are often demonized in the media, it’s only natural to turn to the home-grown (artigianale) products one assumes are superior to multinational fare.

But even these products can fool you. Regulation is predictably complex and doesn’t cover all stages of production. How can you be sure, for example, that the cheese you bought from the picturesque farmer down the road was made from safe or local milk, or that your fancy pasta hasn’t been contaminated or cut with cheaper grano tenero?

Suddenly, industrial food looks less sinister. However alarming “hydrogenated vegetable protein” or “dye number x” sounds, you at least know what you are getting. Industrial standards of hygiene and safety are refreshingly rigorous.

Nor is cost is a guide, as I learned recently at Davide Paolini’s seminar on informed buying. Paolini, the food and restaurant writer for ll Sole 24 Ore, provided insight almost more daunting than informative. Food selection, I learned, requires both education and experience. It can be counter-intuitive and forge strange allies. For example, sophisticated chocolatiers favor raw goods from industrial producers they otherwise scorn. They find industrial ingredients safer and more reliable than anything artigianale.

Such realities have taught me to defer to those who know better. In that spirit, here are Milan merchants whose views and products I trust. It’s no coincidence the businesses are all second careers, proof to me of passion and professionalism.

De Rè Former multinational manager Riccardo Brun came to Milan via Naples and France. He buys and sells only products whose producers he’s met and knows personally. His mozzarella is from dioxin-free areas, his anchovies from Spain, his meat from Piemonte. Via Mercato 20, Tel. 02.766.9877.

Buon Gusto With a managment career behind her, Enrica Besana took over a historic Milan pastificio and renamed it Buon Gusto. She modernized it and went bio/organic, serving light meals. For a bella figura at your next dinner party have her supply you with treats from her seasonally-changing list. She also offers cooking courses. Via Caminadella, 2. Tel. 02.8645.2479.

Sugartree Venezuelan-born Jenny Sugar hails from a long line of Viennese pasticcieri. After schooling and a corporate career in the United States, she let her genes speak for themselves. She now produces dolci and salate; cakes, hors d’oeuvres, pies and quiches. If you’re looking for a taste of home — cheesecake, carrot cake — made from organic ingredients and the finest raw materials, pay her a visit. Via Felice Bellotti 11. Tel. 02.795.350.