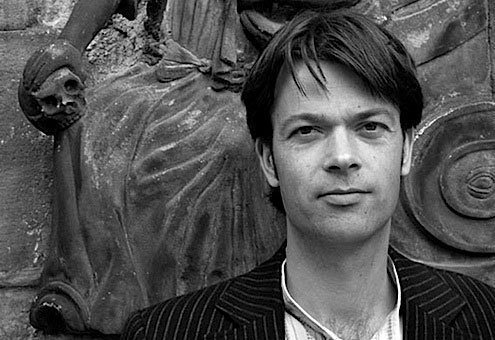 Above, author and translator Mike Stocks © Photo by Gerry Cambridge.

Mike Stocks, an obsessive sonneteer with a flair for the vernacular, has spent seven years translating the sonnets of Giuseppe Gioacchino Belli (1791-1863), modern Rome’s greatest poet. Belli’s sonnets, written entirely in romanesco (the enduring dialect of 19th-century Romans), comprise a human comedy in which one meets a cavalcade of characters: female popes, conniving prostitutes, depraved confessors, enraged stutterers, the filthy rich, the unspeakably poor and everyone in between. “The tragicomic,” says the Edinburgh-based Stocks, 42, “is my preferred terrain: You know, stuff which makes you feel seriously sad even as the corners of your mouth pucker up into a reluctant smile.”

Belli’s language reflects the unvarnished sounds of the streets. What inspired him can still be heard today: a fistfight at the bus stop, fruit bargaining at Campo de’ Fiori, an argument over whether Rome is caput mundi or capital of the Third World. The Russian writer Nikolai Gogol hailed Belli’s “spice and wit.” “The contemporary life of the Romans is so realistically portrayed that you can’t help laughing out loud,” he gushed.

That Belli used only the sonnet form (typically 14 lines following a strict rhyme scheme) makes the challenge of translation not only linguistic but technical. Stocks says his efforts differ from those of his predecessors because they focus on Belli strictly as sonneteer.

The number the sonnets — there are more than 2,000 — didn’t faze him. Nor did the quirkiness of the verse. “I didn’t obsess over language barriers,” he says. “If I had, I never would’ve picked up a pen. I just decided I wanted to do it, so I did it.”

The Chesire-born Stocks (see mikestocks.com) revels in challenges. He once took a one-year writing sabbatical in India — “because it was cheaper” — and turned the experience into a novel, “White Man Falling.” It won the Gross First Novel Award in 2006, the same year he published “Folly,” his first sonnet collection. He edits Anon, a biannual poetry journal that invites anonymous submissions to eliminate favoritism, the bane of unknown poets. Stocks chatted with Marc Di Martino.

How important is fluency in Italian (or romanesco) to successful translation of Belli?

Fluency is not very important. A deep comprehension of every poem to be translated is. Comprehension is not the same thing as fluency. My reading Italian is fair and my understanding of printed romanesco is much the same. I can only get to a certain level of comprehension unaided. Fortunately I have a brilliant romanesco expert in my corner, my editor Alessandro Gallenzi. Before I write a translation we work together until I comprehend every line, word, nuance, ambiguity, tone. And then comes the hard bit: English meter is more rigorous than Italian meter, and English rhymes are less plentiful than Italian rhymes — so within tougher formal constraints than Belli faced, I have to create versions that use wholly natural sounding language (as Belli said, “meter and rhyme must be produced as if by accident”) while remaining faithful to the poet’s original content. As I say, that’s the hard bit…

If Belli were alive today, who would be his ideal subjects? Or “targets”? I think we should say subjects.

Belli spent a tremendous amount of energy exposing the hypocrisy of the Catholic Church in his sonnets. Yet before his death he left instructions for his life’s work to be burned. How do you account for it?

Since it would have been simpler for Belli to have burned his work while he was still drawing breath, the obvious inference is that he felt ambiguous about such beyond-the-grave instructions. It’s telling, too, that he altered these instructions in confusing ways from time to time, ensuring that they were seldom clear-cut. So … these instructions symbolize an enduring uneasiness and personal confusion. But it’s true that as he aged he grew deeply reactionary, and was therefore less able to reconcile the more controversial aspects of his sonnets with his need for respectability. As for his treatment of the church, [he] does expose hypocrisy ruthlessly — but in my opinion more as an inevitable by-product of his project than as a primary objective. Belli’s sonnets revel in the humor, pathos and beauty of human failing: his treatment of the church — as with his treatment of everything else, from grave-digging to sex — is from this perspective of the human comedy.

There are more than 2,000 sonnets in Belli’s romanesco canon. How did you narrow them down to a readable selection?

Not wholly randomly, but not very systematically either. I’ve made sure there is a good selection of his best-known, most famous poems; and I’ve done my best to ensure that I show him in all his moods; and I’ve included a lot of poems that I and my editor personally like very much.

Is it difficult to reconcile Belli’s rather mundane public life with the vision of his poetry?

Yes. There is a strange disconnect between the street-wise, satirical, sometimes vulgar content of his poems, and the respectable, restrained, middle-class content of his public life. Belli was not merely mundane in public life, he was timid, keeping his head down and often trimming his sails to the prevailing wind. I’m not sure how we reconcile his cautious life with his reckless poetic voice. Had he been a braver man, he would have published his poems, and he would probably have been persecuted for them — and I suspect such persecution would have secured him a higher literary reputation in today’s Italy. But although he wasn’t brave, as Alberto Moravia said of him, “He could not flee from the deep, guilty but invincible love that the artist has for his subject matter.” I think Belli was in love with the people in his poems even as he satirized their values and behavior — much as Chaucer is in love with all the pilgrims in the “Canterbury Tales.” Perhaps that goes some way to suggesting an answer.

Did you feel at any point that the project was too ambitious?

No. Had I been a different kind of writer — an academic, a free-verse poet — then my answer to your question might be different. But like Belli, I’m an obsessive sonneteer, and like Belli I’ve spent 20 years getting really good at writing sonnets in vigorous contemporary language, and like Belli all my own poems are about the human comedy, and like Belli I’m something of a lay expert in idiom and the vernacular — so I think I’m ideally placed to render his poems into the fully metrical, rhymed, natural-sounding English translations that he deserves but has not yet enjoyed. I feel deeply similar to Belli as a poet.

The brat she drops has barely hit the ground

Before she’s bragging he’s the best around,

And if you disagree you get a slap.

He knows who’s who, his gifts run deep, he’s full

Of talk, he’s right as rain, he stands apart—

He’s lovely as a finished work of art

And packed with wonders, is this miracle!

In fact he’ll be an ugly little monkey,

To mum, the gruntings of this tit-mad junkie

Surpass the sweet songs of a West End name.

The mothers of this world are all the same.