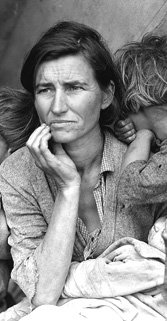 ad Dorothea Lange photographed today’s soccer scene instead of documenting the Depression and the New Deal of the 1930s, she would likely have found plenty of photo ops in the bitter economic harvest that is beginning to gnaw at professional footballers across Italy.

It’s the holiday season, yes, but from Milwaukee to Milano, the mood this year better suits Lange’s heart-rending “Migrant Mother” — her iconic Depression image — than any hopeful Madonna and Child of the Umbrian hills. “In the souls of the people,” wrote novelist John Steinbeck in a Depression-era novel now threatening to turn topical, “the grapes of wrath are filling and growing heavy, growing heavy for the vintage.”

Finely aged Barolo is not what he had in mind.

For now, the headlines focus on the stars, and the millions they stand to lose if television rights, sponsorship money, and ticket sales drops drastically as la crisi bites the boot. According to Infront, a media rights advisor to the Lega Calcio, it’s already begun, but threatens to get worse.

Revenue from television rights, which make up half of teams’ income, is set to fall by at least 10 percent starting in 2010. What’s more worrying, Infront says, is a shortfall in sponsorship (neither Lazio nor Palermo have a backer) and ticket sales. Though sales are up slightly so far this season, the sums aren’t enough. Most Italian clubs, unlike many of their foreign peers, do not own their stadiums. They pay rent and reap no benefits from parking, concessions, and concerts.

Salaries in Italy’s top flight Serie A are expected to decline by 20 percent.

While teams with deep-pocketed owners are unlikely to be seriously affected (Inter Milan boss Massimo Moratti will continue to pay any price for any star), the belt-tightening will torpedo the middle and bottom of the table — not to mention Serie B, which is already struggling (some teams have not paid salaries since August). The lowest leagues, where the vast majority of players ply their trade, are even more exposed.

Big clubs are already using the financial crisis as a bludgeon to beat back wage demands. Diego Della Valle, the tycoon behind the Tod’s shoe empire and ACF Fiorentina, said he would be embarrassed to pay astronomical salaries “knowing there are people who go to the stadium who barely get by on €1,000 per month.”

Meanwhile, Napoli’s chairman, Aurelio De Laurentiis, criticized his Argentine star Ezequiel Lavezzi when the player dubbed the “New Maradona” demanded a raise amid rumors Chelsea was wooing him with buckets of gold. “It’s rude, unseemly and rather vulgar to keep talking about a pay raise for a ragazzo who already earns 2 billion old lire,” De Laurentiis said. “There are people in the world that with their salary can’t even make it to the middle of the month.”

Now, neither De Laurentiis nor Della Valle has taken a vow of poverty. Both hardened capitalists, they’re a bit too wealthy to play the populist misery card in the face of player demands that, bene o male, define their business.

Beyond hard-up fans, the real misery in Italian football isn’t about guys like Lavezzi and their 1 or 2 million euros (although whether they get them will affect Serie A’s competitiveness). The critical problem is elsewhere.

Of the some 4,000 pro players in Italy, less than a quarter play in the wealthy top two divisions. Outside the elite teams and superstars such as Inter’s Zlatan Ibrahimovic and Milan’s Kaka’, most players in Serie A make less than €300,000 a year. The numbers are far lower in Serie B, and the cash is slower to arrive. That’s not exactly lucrative for players whose careers typically span less than a decade.

These toiling masses will feel the meltdown. But don’t cry for them. Shed a tear instead for the tens of thousands of young men who gambled away their youths in pro soccer academies — European sport’s dirty little secret — and find no viable future after failing to find a place at the top of Pele’s “beautiful game.”

These kids populate club youth teams across Italy. Usually working-class, they sacrifice school for football. But when it comes to signing a pro contract at 18, very few make it. The rest, thousands a year in Europe, are discarded, lacking wage-earning skills.

In Italy, the relatively lucky among them find a career in the vast Lega Pro, the new Serie C1 and C2, the third and fourth divisions. For now, they are paid modestly. But for how long can it last? “Many of our clubs will go broke,” Lega Pro chief Mario Macalli said recently. “They won’t be able to sign up for the next championship.”

But beyond them lies thousands of more players in Serie D, the technically amateur fifth-division. Here, the best receive a few hundred euros a month (often illegal income) and, if lucky, room and board. (I once chronicled the descent of Juve’s top youth player into the lower rungs of Serie D hell. It’s not pretty.)

So this Christmas and New Year’s, if you’re a football fan in Italy, go and find your favorite Madonna and Child and, with Lange in mind, mumble a prayer for Our Migrant Midfielders. They may be paid to play a game we love. But like Lange’s Migrant Mother, a few of them might not be out of place in some future icon of poverty in our times.