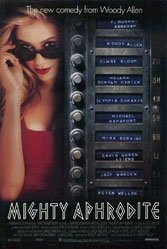 Here’s a movie that goes by one name only, Mira Sorvino. She’s one-woman conjuror in Woody Allen’s otherwise frivolous comedic chitchat about a middle-age sportswriter Lenny (guess who) who wants a kid and but gets mile-a-minute B-Cup. Since wife Amanda (Helena Bonham-Carter) and not-so-spermy Lenny can’t get the baby thing done, they adopt.

Sorvino has no right being as poignant as she is, at least not under Allen’s comic watch, but he seems more enthralled than bemused. Rightly so. He’s set her up to disarm (“So there I am on the first day, on the set,” she tells new-pal Lenny, “and there’s this guy fucking me from behind, right, and there’s these two huge guys dressed like cops in my mouth at the same time and I remember thinking to myself, ‘I like acting. I wanna study.’) Sorvino’s Labrador puppy enthusiasm is everyone’s gain. It’s her movie (though it’s admittedly fun seeing Jack Warden as Tiresias).