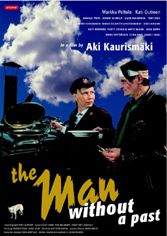 A man (Markku Peltola) with a suitcase arrives in a Helsinki train station and spends the night on a park bench where he’s robbed and badly beaten. Rescued by a poor but kind family that lives in an abandoned shipping container, he regains consciousness with total amnesia. Penniless and without documents or decent clothes, he gets his own container and integrates himself into the family’s peculiar shantytown — a fantastic community of outcasts policed internally by a tough-guy guard named Anttila (Sakari Kuosmanen) and his dog Hannibal. The Salvation Army helps out with soup kitchens and musical evenings, and the man meets Irma (Kati Outinen), who helps him begin to reconstruct his past.

Aki Kaurismäki’s emotionally uplifting film won accolades at the 2002 Cannes Film Festival. As ever, the idiosyncratic Kaurismäki hews to his inimitable style: characters speak the language of literary fiction and all manner of absurdity abounds. There’s a bank robbery heavy on linguistic formalities with no yelling by any of the participants. Kaurismäki revels in placid faces, monotones, and extended silences. It’s a bizarre ensemble of people and pieces that falls together luminously.