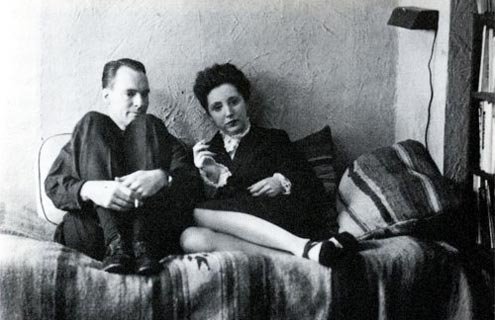 Henry Miller and Anaïs Nin: Together in Louveciennes, 1932.
W

ednesday: Arrival. Early afternoon. Riding into the city on the bus, Eiffel Tower sightings are ubiquitous. My excitement builds. Though haven’t been to Paris in 10 years, I feel as if I’ve repeatedly returned through words. The French have literature (and steaks) seemingly perfected. This visit will be about being close to the ghosts of my favorite writers.

Simon and I settle into our apartment near La Fourche, a small place that can’t decide between the romantic and the decrepit. After a late lunch of steaks smothered in onions, we climb Montmartre. The white city reclines before us. The sun is out. Tourists parade up and down the steps.

Thursday: A cloudy, cool morning. Simon heads early to the Magnum studio — his photography workshop is the reason for our visit — while I walk up Avenue de Clichy. A delightful accident: our apartment is near the neighborhood where Henry Miller lived for several of his Parisian years. I walk in the direction of his apartment on Avenue Anatole France with his 1936 book “Black Spring” in my bag, knowing much of it was written there. I try to draw out everything I’ve ever read about the street, which is strangely quiet for a weekday.

The uninspiring apartment is brick and has a Miller commemorative plaque. I imagine a man with blue eyes wearing a hat walking over the threshold, a man with books in his head, papers in his hands, going out to the cafes to read what he has just written. What excites me most about Miller’s writing is its trueness to life, and somehow I’m able to cast this dull apartment building in that shadow.

After standing awhile in the doorway, I go get a coffee. The man making it is Algerian and the man who brings it to me is Moroccan. I smile and pretend I understand nothing. On the Metro I read Miller. “For me,” he wrote in “Black Spring,” “the book is the man and my book is the man I am, the confused man, the negligent man, the reckless man, the lusty, obscene, boisterous, thoughtful, scrupulous, lying, diabolically truthful man that I am.”

Friday: Another cloudy, cool morning. I take the metro from La Fourche to Shakespeare and Company, the famous English-language bookshop on the Left Bank. I look at next-door Notre Dame while I waiting in line. Inside it’s warm and crowded. The bookstore is famous because its original owner, Sylvia Beach, published James Joyce’s “Ulysses.” Her Rue de l’Odéon store, which closed in 1940, was a meeting point for Lost Generation expat writers just as the present one, opened in 1951 and renamed to honor the original, entertained countless Beat Generation writers. I buy Ernest Hemingway’s “A Moveable Feast,” a remembrance of his time in Paris.

Hemingway also hung out at Gertrude Stein’s Paris apartment. I walk in what I think is the direction of her place on Rue de Fleurus. I pass through the Luxembourg Gardens where people huddle against the wind in olive-green chairs. The color of the gravel brightens the open space. But I’m lost and pass through the gardens again. I’m hungry and have to pee. When I finally find Stein’s apartment, I look at the plaque, take a photo, and quickly leave.

Saturday: Good friends have joined us. We meet at the Eiffel Tower where the sun sneaks from behind the clouds. Later, at night and from the suburbs, we watch the Eiffel Tower’s flashing lights every hour.

Sunday: Grey clouds, cool late morning. Near the Gare St. Lazare I eat mussels and fries. Inside, the station looks like a shopping mall, but the platform must be as it was when Miller waited for the Louveciennes train. That’s where we’re going, to the house where Anaïs Nin lived. It’s hard to say what Nin is best known for, her journals, her fiction, or her lovers. She met Miller in Louveciennes where she lived with her husband, and the relationship quickly turned into an affair. The house is where Miller and Nin wrote and slept together. In her journals she calls it a “laboratory of the soul.”

The village is sleepy on Sunday and a respite from Paris’s size. We follow the map up a gentle curve and see a light-green gate open. Is that it? A man and his blonde daughters are going in and out of the gate next to a plaque saying Anaïs Nin lived here. Of course people live in the house, though they’re the only ones we see in town. We ask to stand in the garden. I realize that the writers I admire were just people who moved their things in and out of houses too, that this house and its inhabited rooms will always be filled again and again just as I fill my rooms with the books they wrote.

But we’re gawking and photographing while the family wants to shut the gate. We walk awhile longer, get croissants, and drink beer in front of the stone church.

Monday: I’m worn out from literary wandering. The ghosts of writers are everywhere: Zola, Proust, Balzac, Voltaire, Hugo, Miller, Nin, Sartre, Hemingway, Beauvoir, Fitzgerald, Joyce, Sand. Avenues are named after them and cemeteries filled with them. I go shopping instead.

Tuesday: Departure. Flying over Italy, the evening light cuts the hills into pieces of brilliant green and shadow. I’m home, stimulated and refreshed.