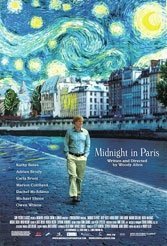 Allen’s latest is a sweet little ditty about the precincts of nostalgia that uses Paris as an idyllic mouthpiece for yearning. Successful Valley Guy screenwriter and aspiring novelist Owen Wilson (as Gil, the latest Woody stand-in) finds himself in Paris with his Material Girl fiancée (Inez, Rachel McAdams) and her pretentious Republican parents. Gil lives and breathes Lost Generation fantasies (his novel-in-progress is about a man who works in a nostalgia store), so much so that midnight magic transports him backwards to a version of the world of Scotty, Zelda, Cole Porter, young Papa Hemingway, Pablo Picasso, Gertrude Stein (Kathy Bates), and Salvador Dalí — played by the movie-stealing Adrien Brody, who makes the line “I see rhinoceros!” into a utterance of comic beauty.

While the anti-eccentrics are busy shopping or partying — Inez cozying up to a pretentious professor, another Allen archetype — Gil time-travels. Alas, the traveler falls for Picasso mistress Adriana (Marion Cotillard), the anti-Inez. If only she weren’t dreaming of going further back into time, hankering for the Belle Époque of Lautrec.

As gently charming as all this is, the otherwise goodnatured Wilson wears Allen’s comic vest uncomfortably, hamming it up in monotone. A romantic he’s not. Moral of the story: No age is appreciated by its residents, susceptible as they are to their own pitfalls. There’s always a better place in time.

“Midnight” is a small pleasure at best and doesn’t live up to the best of his romantic fantasies, 1985’s “The Purple Rose of Cairo,” which stakes out a parallel reality and holds its ground.