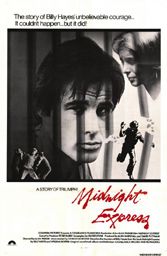 Director Alan Parker and co-writer Oliver Stone create a landscape of hard knocks in this semi-true story of American Billy Hayes (Brad Davis), arrested and imprisoned by Turkish officials in 1970 for smuggling hash. Though Parker revels in cultural relativism and drug admonishment, he also attends to character. Hayes is humbled and humiliated in prison, but he’s also made vivid. He befriends stoned British inmate Max (John Hurt, decrepitly chiseled) and rallies on his behalf.

The Turkish government slammed the film for misrepresenting its penal system. Parker makes no effort to humanize the guards; they’re forensic sadists in a sordid environment. Family and U.S. government efforts to help Hayes get nowhere because the big bad Turks won’t yield. Ironically, the post-9/11 world (via Guantanamo) would seem to vindicate the relentless Turks. Davis (who died in 1991 of complications from AIDS) is compelling in the lead.