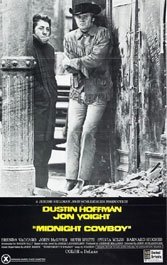 A hopeful Texas drifter bumbles into New York City looking to make it big, along the way befriending a garrulous hobo. That, in a nutshell, is what director John Schlesinger has to work with. But he also has an exceptionally odd couple: Jon Voight and Dustin Hoffmann. Their often funny and occasionally moving friendship is at the core of the movie.

Voight brings credulity and sincerity to Joe Buck, a drawling loser who makes his Manhattan money as a gigolo. Gnome-like Hoffmann’s Ratso Rizzo is a nattering shrew. Together, they’re an “Of Mice and Men” duo for the mid-20th century, set-aside lowlifes trawling for respect. In its absence, they have each other. The wealthy are superficial and alienated; the city is an enemy; and the vision Ratso has of Florida as the Promised Land is illusory.

As muddy and maudlin as all this can get, particularly toward the ballad-snarled climax (Harry Nilsson’s “Everybody’s Talkin”), Voight and Hoffmann are together bigger and better than the urban-decay story they inhabit, their affection amid the vileness something of deep worth.