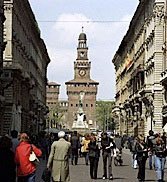 Even Milan's name is uninspiring, deriving from Mediolanum — Latin for “a place in the middle.”
W

hen I tell people that I live in Italy, their first reaction is “Oh, how romantic!” followed by “I envy you; it is my dream to live in Italy.”

When I tell them where I live, they add, “I’ve never visited Milan. We just changed planes/trains there for Florence, Venice or Rome…”

Milan is a stopover on the way to nicer places.

I don’t think anyone visits Milan for fun — or even to see me. If I want to see friends visiting Italy, I must follow them to Florence, Venice or Rome.

Milan offers few Italian tourist delights. Its architectural and art gems are well hidden. Its climate is not made for lounging in cafes. Its most famous culinary specialty, cotoletta alla Milanese is really wienerschnitzel. Local shops are outlets for international brands, whether from Madison Avenue or Sloane Street. Milan has no song. No one has left his heart here and the only fountain to throw three coins in is a Craxi-era monstrosity in front of the Castello Sforzesco. Even the city’s name is uninspiring, deriving from Mediolanum — Latin for “a place in the middle.”

In the middle of what? Roman roads connecting the Italian peninsula, Northern Europe, the East and Spain met in Milan. It has always been a stopover for elsewhere.

Nonetheless, it is not a bad destiny for a city. Being in the middle is Milan’s salvation and the basis for its claim to be Italy’s only modern, more or less fully-functioning European metropolis.

The geographical middle is synonymous with the commercial middle. Throughout its ducal, ecclesiastical and colonial phases, commerce has given Milan longevity, flexibility and vitality. By luck or design, the Milanese excel in perennially popular sectors — clothing, arms, finance and banking. Its fashion industry is about the only un-embarrassing thing that gets Italy in the international media. Though swords are no longer made on Via Spadari, outlying valleys are dotted with modern arms factories. London’s Lombard Street was named for financiers who arrived there in the 13th century.

Milan never had a brilliant flowering followed by a decline. Its monuments didn’t decay gracefully; nor were they maintained to glorify better days. Milan never felt a need to impress others with big urban projects such as Roman papal ones. Instead, the Milanese worked on their beloved Duomo for centuries. Napoleon failed in his plan to demolish the Castello Sforzesco to make way for a new neighborhood. Milan’s big artistic moment came with Leonardo da Vinci and the Sforzas. The most visible reminder of this period is not the fading Last Supper, but a system of canals that Leonardo designed for — you guessed it — commercial transport.

Being in the middle got Milan shuffled among European powers. Since the Romans knocked off the Gauls, who had knocked off the Etruscans, Milan has been French — Bourbons and Napoleon — Spanish and Austrian. Southern Italy uses its history of domination by the same villains as an excuse for poverty and criminality. Milan made mediating (again) between foreign and Italian influences a strength. While Venice remains humbled by its Austrian subjugation, Milan — harsh episodes aside — uses the connection to justify its self-defined role as Italy’s only true European city. Its Austrian heritage ties it to orderly northern Europe not the dis-orderly Mediterranean. Sheer proximity to Switzerland mysteriously boosts this perception.

After World War II, teeming trains from the South brought agricultural workers north for industrial jobs. Today young professionals come from the South and smaller cities, particularly Genova and Venice, both in decline. Young foreigners come for the fashion and design industries. Rome’s two lumbering bureaucracies — the church and the state — attract seekers of lifetime jobs. Milan lures self-starters who are less interested in just getting a job than in making it big.

However much outside influence may have made Milan less isolated and self-involved than other Italian cities, the local work ethic eventually subsumes all comers. Unlike in Rome, dinner party guests rise to leave at 11:45 p.m. so as to be out the door by midnight, ready for a new workday. The only way to relax in Milan is to leave it, which is easy to do, since Milan is in the middle. “Only two hours to the mountains or to the beach,” the Milanese boast.

In Heaven, the joke goes, the police are British, the lovers are Italian and the Germans organize. With its wider European influences, Milan could also be heaven. After all, its lovers are Italian, its cooks too. It’s orderly but still organized by Italians. This makes it interesting, but apparently not enough to visit — even to see me.