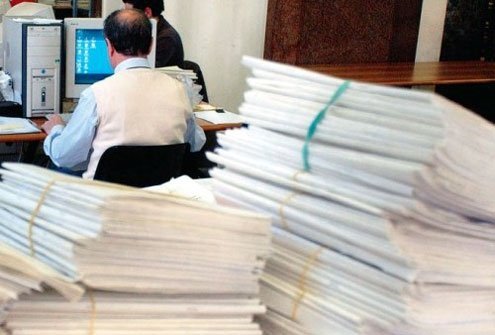 But it says Florida, not Miami...
M

arrying an Italian is like being given a magic wand to help you better maneuver through the country’s bureaucratic maze. I probably shouldn’t jinx myself (because that would be so superstitiously bel paease of me), but I’d have to say that since I married one of their own, Italians have actually seemed to try to make my life easier.

Take the famous trip down to the comune to apply for my residency permit. Months ago (actually, maybe years ago), I had tried applying for residency in Rome. After asking for information at the “Information Booth” (which as it turns out gave me the wrong information… surprise, surprise), I took a number and anxiously waited my turn, which came after 2 1/2 hours.

I was told by an ever-so-friendly-hired-by-the-state worker that I would need to fill out a bunch of forms and show her all my documents. She wanted my passport, my codice fiscale, my permesso di soggiorno (permit of stay), yaddah yaddah yaddah.

So far so good.

She began entering my information into her computer terminal, which it appeared she didn’t know how to use (just my luck) only to stop dead in her tracks.

There is problem, she said. “We don’t know where you were born.”

I dismissed this confusion as an oversight.

“Oh, that’s simple. I was born in Miami,” I explained.

She then pointed to my passport. “Well, here it says you were born in Florida, see?”

American passports list only the state. Conveniently for me, the ever-so-friendly-hired-by-the-state worker needed verification of the city.

Two can play the pointing game, I thought, so I pointed back, this time at my permit of stay. “Well, here it says I was born in Miami, Florida. See? Miami is in Florida. So, we’re clear then, right?”

She shook her head. My permit of stay was not an official document, she announced (even though I needed it to live and work here, a puzzling paradox). Since my passport didn’t state my city of birth I would require a slew of other documents. These, she said, included my birth certificate with appropriate seal, translated by an official hired-by-the-state-translator. This in turn needed to be approved and notarized. Based on what she told me, the time involved came out to about a year.

I decided to take the Italian approach.

“Can’t ya just cut me a break and take my word for it and give me my residency?” Wink, wink.

Had the ever-so-friendly-hired-by-the-state worker been a man, my guess is that after a little fuss I would have had everything I needed. Not with this lady.

So I did what any normal person would have done, I gave up on obtaining residency altogether. Laziness, I know, but it just seemed like too much of a headache.

Fast forward to 2009, post-wedding. I returned to the famous comune with the same documents. This time I was determined: I absolutely needed residency to get my national health card, which entitles me to free medical assistance.

I walked up to the window, told the man I was a straniera, and showed him all of the paperwork, shoving it one piece after another under his window.

I gave him a wink and said, “But I’m married to an Italian.”

Ahhhhh. “E allora?! Why didn’t you say that in the first place?” I was a resident in five minutes, grazie!