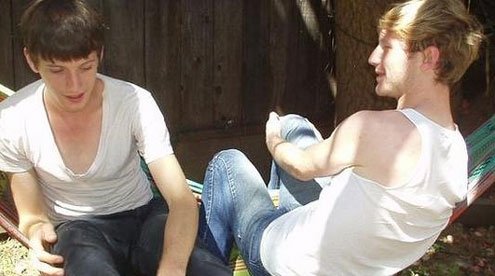 ou’re going to read about plenty of new musicians this spring, both in this column and elsewhere. A crop of fresh faces will join legions of formerly anonymous workhorses and aging dinosaurs for another season of aural expression. With technology and access at your fingertips, the best writers can hope to do is point you in the right direction. Let me help with a column about Mi Ami.

Mi Ami was founded in San Francisco in 2006 by guitarist Daniel Martin-McCormick and drummer Damon Palermo, guys who had been playing experimental and improvisational shows in the city beforehand. When Jacob Long, a former band-mate of Martin-McCormick’s, joined as bassist not long after, the line-up solidified. Their first recording together was 2008’s “African Rhythms” 12″. These songs strung wire around Afrobeat, disco and punk, and tethered it loosely to Martin-McCormick’s distinctive vocals. It was an impressive debut.

The first proper full-length, 2009’s Watersports, was equally good in a different way. The album’s heavy meddling in dub-like reverb and its willingness to experiment with rhythms distanced it from “African Rhythm’s” reliance on dance beats. I understand if you never got around to hearing it: The label, Quarterstick, announced it was dissolving operations and laying off staff the day after its release. Press was encouraging but limited.

The band’s second album, Steal Your Face, got considerably more attention thanks to a new home on another stalwart Chicago label, Thrill Jockey. In retrospect, the sounds of the band’s 12″ singles and Watersports seem less like a journey than a destination — Steal Your Face is the crystallization of the idea of Mi Ami, a perfect example of music by a band that listens to it as much as they play it.

Steal Your Face‘s production brought them closer to the listener: Reverb and echo no longer erected a wall around melodies, hooks hit harder than ever, songs easily got stuck in your head. The album art, including a cut-up face of Bob Marley on the cover, was instantly recognizable. Their live shows were a thing of beauty. Though their influences extended from Lagos to Rio to Berlin to New York, the way they combined them was unique. In short, they’d perfected themselves.

Then, sometime in the past half-year, Long left the band. Back to being a duo, Martin-McCormick and Palermo elected to return to the knob-twiddling experiments of their origins. After a few years on the road and a core identity established, they were now starting over. Dolphins (Thrill Jockey) is the first fruit of these new labors and, somehow, they have done it again. This music couldn’t come from another group.

Cursory listening to the four songs get you thinking this is strongly influenced by late-1970s Italo-disco, specifically the kind pedaled by Giorgio Moroder. A defense is in order. Italo experienced a significant revival in 2007 but its bandwagon stopped rolling years ago.

Nor is this the first time Mi Ami has demonstrated a more electronic side (take the 12″ single “African Rhythms.”) If the addition of a Roland 707 drum machine (which Palermo now uses alongside a sampler requiring floppy disks) and Martin-McCormick’s synths suggested pure Italo, the truth is the 707 wasn’t even released until 1984 (years after Italo’s heyday). There’s also far too much going on in songs like “Sunrise” or “Echo” to pin their evolution on any one influence. You could argue for subgenres ranging from minimal techno to breezy chillwave to chugging house to pure ambient instrumentals.

Doing that, of course, misses the point. There is only one greater pleasure than listing to the tangents of Mi Ami’s music, and that’s actually listening to them. “Do you love me?” is the question the band asks in name. Valentine’s Day may fast be approaching, but I already know my answer.