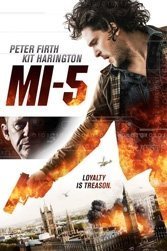 From 2001 to 2012, MI-5 — or “Spooks” — was the British TV contemporary to “24” and a distant cousin to “Mission Impossible.” Irreverent, acidic Harry Pearce (Peter Firth) headed up an elit British counter-terrorism unit that often found itself as much at odds with the CIA as with nefarious foreign agents. The movie version picks up on that old enmity. A detained Islamic extremist with a decidedly anti-establishment bent, Adem Qasim (Elyes Gabel), is about to be turned over to CIA when he’s freed in a raid that reeks of insider complicity. Harry, of course, is discredited. All want his scalp. So he commits suicide — which is to say he vanishes. Enter Will Holloway (Kit Harrington), a former MI-5 who’s long has a love-hate relationship with Harry. He’s re-drafted into the service to track down his scheming one-time mentor.

As with most workmanlike thrillers, this one plays on misdirection, loyalty and the aroma of moles in the command structure. Harry-hunter Will wants to doubt his mentor but can’t, not fully. How did Kasim escape? What’s he planning? More to the point, did “the Americans” scheme to spring him to embarrass British intelligence or is British intelligence itself playing willing pawn to Washington. Aside from running, jumping, shooting and sleuthing, the real friction here concerns the ongoing brotherhood of uneasiness between the U.S. and the UK, ostensibly on the same side but forever locked in one-upmanship and reciprocal suspicion.

Firth is his reliable and unsmiling self as Harry, steely and secretive, with Harrington little more than a foil to keep amorality from running amok (“You can do good or do well…” ). In the potential mole department are MI-5 chief Oliver Mace (Tim McInnerny), an old TV hand, and his no. 2, Geraldine Maltby (Jennifer Ehle).

Betrayal at the highest level is the name of the whole of this game and director Bharat Nalluri pulls it off with typical if unspectacular British coherence, friendlier to repartee than digital effects, refreshing by itself.