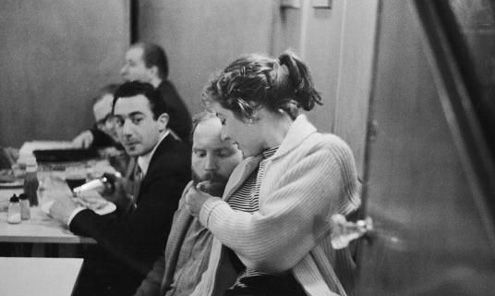 We both ordered vodka on the rocks...
T

he motto for the Metropolitan Hotel on London’s Park Row reads as follows: “Urban energy paired with cool escapism.” By design, both were on immediate display as I checked in for a three-day business trip.

The lobby was furnished in slinky low-backed couches of pure white. Lipstick-red chairs swiveled. Attending the reception area were two beautiful women and a metrosexual man dressed in black. They were framed by exotic dark wood paneling and a white counter.

I checked in next to an Englishman finely clipped and tightly tucked in an Armani suit. Another man was with him bravely toting a leather briefcase and serious brow.

I was just off the plane and not dressed for the occasion. I was given sweet “cordial” attention, exchanged my credit card for a key and took the elevator up to the sixth floor.

My room was small and boutique-like: A birch wood headboard with grey comforter, an entertainment cabinet and work desk. There was a small bathroom with shower and soap smelling of eucalyptus and peppermint. A vanity light didn’t exist and the hair dryer was tucked in a far away drawer near the remote control. Obviously I was not the clientele they were catering to.

It was later that night that I really came to know London’s Metropolitan Hotel. I met up with Bryce, a colleague just in from Washington, D.C. Bryce had asked me to join him for a drink in the hotel bar.

The Met Bar is attached to the hotel and dubs itself “London’s byword for cool and sophisticated, reserved for members and hotel guests only.” It was like walking into a darker version of the hotel. White light emanated from a backlit bar where bottles sat on glass shelves. Leather booths ran across the sidewall and small round tables sprinkled the middle. In the back a DJ mixed techno music with Motown.

Although I craved a martini, we both ordered vodka on the rocks, having heard that Brits are unpolished with mixed drinks. As we discussed the conference, which began the next day, Bryce noticed something surprising. Below his breath he whispered, “Look at the couple next to us.”

Sitting at a round table a few feet to our left was a large balding man who overflowed his trendy leather chair. His dark suit was in contrast to his pale countenance, his tie tight at his neck. Sitting with him was a very petite cinnamon-colored woman with long dark hair. The woman looked 23 to his 55. As she spoke, she swirled the rocks in her glass. He studied her as she spoke, his face serene — as if he was elsewhere. She giggled at him sweetly.

But I could only see his forearm. His hand had disappeared into her lap.

Bryce and I looked at each other and back again. “It looks like an unequal relationship to me,” I said.

We both looked around the room and noticed that the majority of the women were petite and cinnamon. They looked Malaysian. A group dancing with each other in precarious heels and mini skirts while suited men looked on.

Tucked into booth along the side were several couples similar to the one next to ours. Again, the hands were out of view.

In a flash I realized I was somewhere other than where I thought. “I want to find out what’s going on,” I said. “I’m going to ask the bartender. Maybe he’ll tell me.”

I walked up to the bar which was empty save a white-aproned man in black vest behind the counter polishing a beer glass. I decided to play dumb.

“Excuse me sir. I’m visiting from the States and this is the first time I’ve been to this bar.”

“Yes…” he said, moving his cloth around the glass.

“Looking around I must say that there seems to be some interesting things gong on here. For instance the couple just behind me.”

He looked over.” Yes,” he nodded knowingly.

“So, do the men meet the women here or do they bring them here.”

“Both,” he replied, still polishing his glass but glancing around the room where it all played out around us.

“We just look the other way,” he said flatly.

I nodded and walked away.

Back at our table, Bryce and I became transfixed by the nearby couple. We watched every move and glance.

“Let’s stay here until they leave. Let’s see what happens.” Bryce said. We were voyeurs for a mating ritual and decided to stay to see if they left together.

Bryce ordered me another vodka and we dug in like nature photographers. As they kissed, he stroked her thigh and she flipped her hair. In this way, the night passed. White men and Malaysian women left in pairs, sometimes in threes. Bryce guessed at their proclivities and desires. But I was getting tired and the cinnamon girl was holding out.

“Come on. Stay and have one more drink. It can’t be much longer. We’ve put in so much time already.”

We passed through the dark double doors and traveled from one world to another. In an instant we were back in the lobby: bright white, cool and polished.

In the elevator, I pushed six and Bryce four. The lift rose slowly and the doors opened at four. Bryce walked off and turned to me.

There was awkward silence.