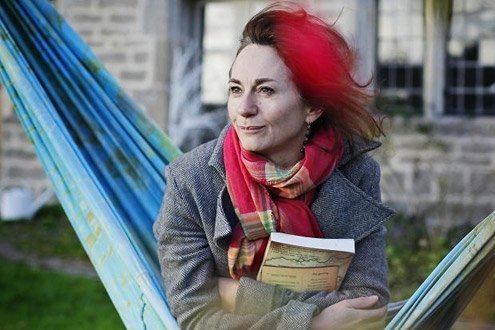 Rachel Joyce, author of "The Unlikely Pilgrimage of Harold Fry" and "Perfect."
R

Key to this book: it’s sharply plotted, with an intricate web of revelations. For most authors one such tale is enough. Not Joyce. After three short chapters, her novel, set in the 1970s, suddenly plunges into two ongoing and constantly alternating tales. Both are complex.

The introductory narrative follows 11-year-old chums, Byron Hemmings and James Loewe. Their fall into the obscure landscape of obsessive guilt begins over four decades ago.

The second, overlaid tale arrives with surprising swiftness. Chapter Four begins in the present, as we meet a fiftyish, memory-deprived veteran of repeated electric shock treatments. He is a man terrorized by ill-defined shame and remorse. He is known to himself and to others only as “Jim.” Easy to guess he’s an older version of Byron or James. But which one?

In brief prologue Joyce has already introduced most of her secondary cast of roughly sketched figures. Her more fully evoked leads live with their dysfunctional families in Clapham, an upwardly-striving, middle-class commuter town outside London that is edged and isolated from the outside world by suggestively ominous moorlands. Both the town and its elite private school only accept “perfection.” It’s a rigid set-up, based on rules, and secrets. The boys struggle to decrypt this adult world. Still children, they’re bound to make mistakes.

He informs Byron of a recent article: “This year scientists have found problems; so they’re going to set time two seconds forward.”

Horrified and frightened, Byron protests: “They can’t mess with time!”

Too bad that James misread his newspaper. And Byron has already forgotten that the second hand will move ahead. When he believes he sees the second hand on his own watch slip two seconds into reverse, he thinks: “This is it!” Terrorized, he grabs his driving mother’s shoulder. The car swerves. Byron sees a little girl on a red bike wheel on the roadway. He’s also convinced he “sees” her struck down and lying on the ground — unconscious, perhaps dead. But his mother has seen nothing.

The two boys form their plan to save Byron’s mutually adored mother from the consequences of her presumed “crime.” In childish misunderstanding, they add error upon error. When a real tragedy does come along, they blame themselves. But was it their fault?

Now (entering chapter four), our overlay story begins. Also set in Clapham, 40 years later. After a moorland mental institution closed down, Jim is “released.” Drifting down to Clapham, he finds menial work in a supermarket café, and shelter in an old van. The relentless shock treatments have damaged his linear memory. He remembers his past only in glimpsed flashes.

Hint: sooner or later, the pieces of every fictional puzzle must fall into place.

But before they do, Jim lives in constant anguish, and the reader in suspense. Convinced he’s a danger to others Jim spends his days in hopefully protective ritual: “Hello, table. Hello, chair.” He shakes his troubled head: “Once there were two. Now there’s only one.”

He wants only to escape his obsessions — and to love and be loved by another person. Sounds a little saccharine? Yet Joyce handles Jim’s emotional rollercoaster with delicate skill, asking: Can such a mutilated mind achieve a normal life?

Little in these two tales will provide answers to our questions. Until the novel’s close. By that time Joyce will have floated enough red herring clues to make an Agatha Christie mystery pale by comparison.

If there’s a weakness in this wonderfully constructed novel, it lies with too-familiar secondary characters. Let’s say that a blonde princess-style mother, a pathologically inclined father, a wicked witch neighbor, and an overly chummy scam artist are not news. At a guess: Joyce slimmed the secondaries to avoid overloading her already hyper-intricate plot.

So: did one — or both — of the youths really cause the long-ago tragedy? And which is called “Jim” today?

Your reviewer can’t leak that information. And since “Perfect” is both fine examination of guilt and shame, in a narrative tour de force, you’ll relish finding the answer for yourself.