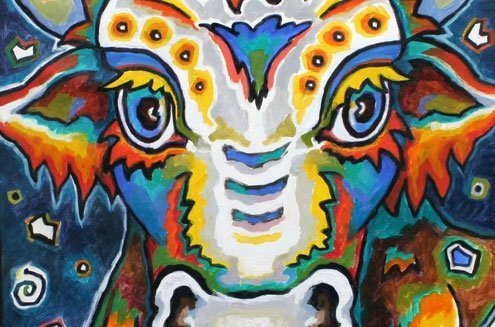 Magic Cow Day comes with its own set of rituals.
&

#8220;Buon Natale,” or Merry Christmas, someone says to me, to which I say, “Oh thanks. You too, but I’m not actually Christian.” The person stares at me blankly, “Yes, but you celebrate Christmas anyway, don’t you?”

I suspect Jews, Moslems, Buddhists and atheists face this kind of annual December exchange. I feel like firing back, “What part about not being Christian did you not understand?”

But instead I smile and say, “Well, we’ll be inviting my mother-in-law and ‘the old girls’ on our floor over for a piece of panettone (traditional Italian Christmas cake) and a glass of spumante at lunchtime.” That usually satisfies my inquisitors. They either change the topic or go away.

Nobody likes to be a party pooper, and while I wanted this month’s column to be as light-hearted as the season, the truth is that Christmas is an ambiguous time for LGBT people. While many of us are devout and practicing Christians, we’ve hardly been treated with brotherly love either by Christian denominations, or, in Italy, by the Roman Catholic Church as a whole.

This year, like every year, the Catholic Church does a Christmas media blitz, which includes slick television commercials showing all the wonderful things it does to help the wronged and those cast aside by society. Although the Pope Frances Vatican has provided a few encouraging words, it has yet to accept any responsibility for the decades of damage inflicted on LGBT people. When it comes to our plight, Catholic charity is, at best, selectively blind.

Christmas is not just about religion, of course. Many gay people harp on the festival’s more secular and commercial sides by decorating their homes, trees and balconies to extremes that would make a Las Vegas casino look dreary. It could be a form of overcompensation for being shut out.

Family is also a major focus of seasonal celebrations. This too can be a problem, since many LGBT people have been disowned, while others have been simply set aside and estranged like toys nobody wants any more. Those who still make the annual Christmas pilgrimage home often leave their partner behind and pretend “all is well,” covering up the essence of who they really are in an effort to keep everyone else happy. Many of my friends tolerate this annual December charade. It’s a sad part of the ongoing psychological and social insult we’re compelled to endure.

Gift giving, like almost everything else in Italy, is a complex and confusing ritual. In the northeast and in Sicily, Santa Lucia brings gifts on December 13. In many homes, Babbo Natale (Santa Claus) or the baby Jesus bear gifts on Christmas Eve. In Rome, a witch called la Befana does the gift-giving honors on the Epiphany, January 6. Aside from all this bureaucratic confusion, Santa Lucia, Babbo Natale, the baby Jesus and Befana appear to agree on one point: that gift-giving is an excellent time to remind LGBT children that they’re not “normal.”

When my companion Alberto was a boy he wanted a plastic toy oven set, which of course he never got because little boys “don’t play with toy ovens.” In spite of the discouraging message, the adult Alberto still loves to cook. As children, my friends Luca and Danny both asked for a Ciccio Bello, a life-like baby doll. They got footballs instead. If a boy wants and receives a doll instead of a football for Christmas does that mean — horrors — that he might grow up to be a nurturing caring father?

As adults, we might laugh at these stories. But as kids, they represented yet another example of how LGBT people, cut out of the mainstream, were left to fend for themselves. When it came time for any number of “normal” socially accepted practices, they basically had to invent their own.

Beyond cake and wine with “the old girls,” Alberto and I have done just that: we’ve invented our own set of rituals and celebrations to pass the season in style. According to Catholic tradition, Saint Lucia is the shortest day of the year (Santa Lucia, il giorno più corta che ci sia.) As any self-respecting astronomer or Druid can tell you, the shortest day, the winter solstice, is Dec. 21. Six months later comes summer. We usually celebrate the coming return of the sun with a few friends, dinner and a toast.

After Christmas, we also celebrate our very own Magic Cow Day. Magic Cow Day includes a dinner to which everyone brings an unwanted recycled gift, the odder the better. The gifts are placed on the dinner table and names are drawn to determine who picks first. After the first person chooses a gift, the others can either dive into the remaining pile or “steal” a gift from someone who went before them, sending that person scurrying back to the gift pile. Last year, a few of our friends staged intense negotiation over a plastic spinning disco lamp and a chicken shaped teapot.

Even though we don’t celebrate Christmas, I must admit it is a wonderful excuse to give a friend a small gift that says, ti voglio bene (literally, “I want goodness for you.”). It’s also the way friends say, “I love you.”