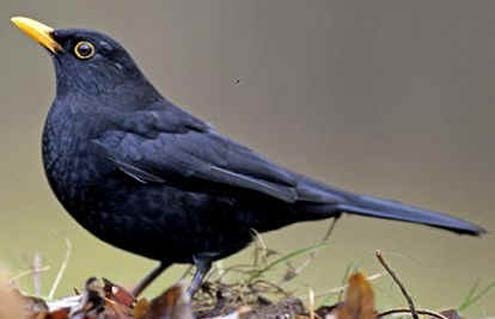 The merle is a merle in France but a blackbird elsewhere.
A

shiny, blue-black merle is drinking from our terrace birdbath, throwing back his little orange beak and enjoying the cool water on this very hot day late in May.

Friends who came yesterday to see the garden and have a glass of wine told me that the French merle is known as a blackbird (turdus merula) in Canada, England and God knows where else, but that here in France, a merle is a merle. They sing as if it’s their only purpose in life — aside from pulling long, juicy worms from the base of the artichokes. Certainly their collection of notes is a morning and evening delight. Better still, they never, ever sing the same song twice. Perhaps a good lesson for all of us from time to time. Try to change your tune.

A pair of blackbird-merles has honored our garden for almost two years now. In the beginning, I watched jealously as they swooped and sang in my neighbor’s garden, a magical slice of land that has been planted since the time great-great-grandfathers.

Had I been able to see the raised eyebrow on our first merle, I might have known that he was casing the joint. On his list, aside from feeding: Were we responsible? Were we kindly? Were we non-violent appreciators of so important a member of late spring’s traveling orchestra? Did we have salivating cats or lurking dogs? Did we understand that from the merle perspective dried toasts with seeds is preferable to those made from plain, white bread? Would we, finally, revel in and appreciate his skillful warbling in the same manner as our neighbor, a thoughtful man who once, after having found a poor little merle with a twisted beak unable to forage for his dinner in the earth, dug out the worms himself and left them on the soil where they were instantly accessible. The little merle followed him through the garden, never leaving his side.

Listening to our talented merle, I thought to talk back, to imitate the crazy notes of his original songs, hoping to communicate, to make him know just how much he brightened my mornings and evenings. After every trill, I whistled back, following his notes as well as could be expected from a lowly human, and he continued to sing. Each song he produced was more complicated than the previous one, and I found myself trying harder and harder to follow his merle melodies, sort of like dueling banjos, only with whistles.

After several minutes of what I considered a lovely dialogue, he really let me have it — a song so rich in whistles, warbles and trills that I finally surrendered to the master.

I thought about my propensity to want to interact with almost everything, even merles, to talk with everyone I meet when perhaps he or she might just wish to get on with a busy day, to offer solutions for friends’ complaints, when all they probably want, or need, is an ear or a shoulder to relieve the weight of their troubles.

I thought about how many times our merle had shown me his world through music, perhaps as a kind of “thank you” for his daily breadcrumbs, his clean water supply, his fat earthworms that thrive on my compost, his straw from my mulch with which to build nests. I thought, “Perhaps it’s a bit arrogant to try to sing with a merle, king of the garden, right up there with a nightingale. Perhaps this merle is really trying to help me learn yet another lesson.”

So I did something different the next morning when his beautiful music began.