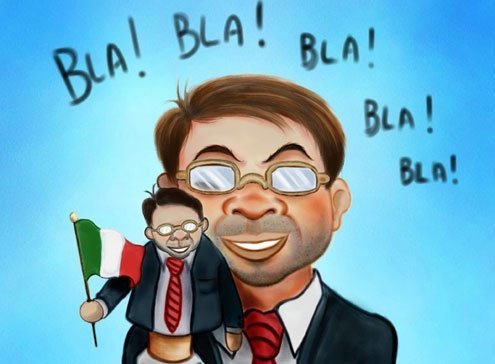 Italy can't create a meritocracy. Illustration by Carlo Sitaro.
A

man goes to a psychiatrist. “I’m going to show you pictures,” the psychiatrist tells the man, “and you tell me what comes to mind.”

The first card shows a circle. “Sex,” the man says.

The second one has a square. “Sex,” the man says.

The third has a rectangle. “Sex,” the man says again.

“Is sex all you can think of?” the psychiatrist asks. “Well,” replies the man, “you’re the one showing the dirty pictures.”

Well, I’ve felt that way lately, though not about sex. In fact, I hardly knew what I was thinking until I read “Meritocrazia: 4 Proposte” by Roger Abravanel (Garzanti, 2008). Before reading Abravanel, I didn’t know what previous columns on cheating in school, wasted human capital, and even the indomitable nonna had in common.

I didn’t realize that the “principle cause” behind my musings is also the principle cause of Italy’s high public debt and depression rates, its expensive drugs and fresh produce, wacky shop hours, live-in adult children, sex, race and class discrimination, poor school performance, national chauvinism and corruption. Behind it all is Italy’s failure to develop a meritocracy, where “the best get ahead on their own capacity and effort, independent of their family origin or sex.”

A consultant at McKinsey & Company for three decades, Abravanel has written what amounts to a category-killer. His excellent book puts the current spate of Italian “doom and gloom” to shame. Carefully and apolitically, documenting his sources, Abravanel traces the origin of the word meritocracy to a 1958 satirical essay by British sociologist and policy-maker Michael Young. He cites international examples of so-called “fabbriche d’eccellenza” (“excellence machines” including the Ivy League, McKinsey, France and Singapore’s civil service training) and explains what makes Italy harmfully unequal and unjust. He offers some Italian success stories, including eyewear maker Luxottica and how the Turin judiciary worked to eliminate its case backlog. Finally, he offers “Four concrete proposals to give value to talent, make our country richer and more equitable.”

Some readers may find parts of it obvious. But anyone tempted to dismantle America’s meritocracy following the chaos wrought by a few graduates of its fabbricche d’eccellenza should read this and think again.

The collection of useful statistics is worth the book alone. A graph charts Italy’s decline relative to Greece and Spain. Another shows that Italian young people are less prepared than French, German and even American ones. Notwithstanding this, 68 percent of Italians think their culture is superior to others; only 55 percent of Americans and 32 percent of the French think similarly.

Abravanel plots two measures of a modern and “just” society — inequality and social mobility — on a graph. Italy huddles alone in the bad corner of high inequality and low mobility. Where you are born is where you stay. Italians and foreigners tend to romanticize such social stability, oblivious to its poison.

Less obvious is the economic cycle of de-merit, but Abravanel shows how interaction between the two cycles can create a climate of sfiducia — chronic mistrust — that torpedoes opportunities, production and jobs.

The book must make unpleasant reading for government ministers alleged to consider it indispensable. Abravanel attacks the family as a social and business model. Widely considered Italy’s backbone, he says it favors the unqualified and exalts the local. Italy’s family businesses are not so nimble as they are vaunted. They lack the skills and vision to meet looming challenges. He scorns partisan and serial educational reforms whose only purpose seems to be discredit previous ones proposed by the opposition.

But his approach to the Catholic Church’s role is curiously slight. He barely mentions its influence on a culture that promotes equality at the expense of excellence. Nor is it mentioned in connection with the way Italians, in terms of lifestyle goals, confuse job-creating consumer capitalism and conspicuous consumption.

Abravanel’s key proposals center around creating national testing, like American SAT tests (on the way out in the U.S.?), creating an agency to help stimulate the economy (another Italian agency? Boy, is he optimistic), repairing public services (good luck) and promoting women (it’s about time).

Still, the next time the shrink shows me a drawing with a circle, I’ll say “meritocracy.”