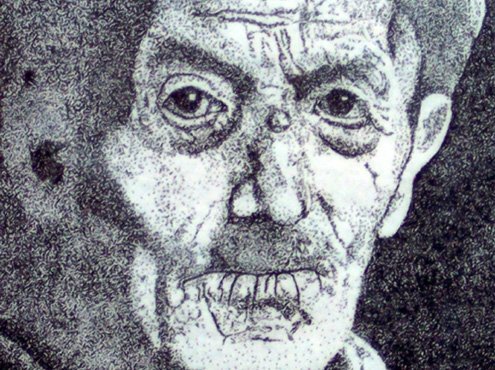 Do you ride the 80 bus? Drawing by Gayle Helgeson.
O

dd things have happened to me since I turned 30. My co-worker, for example, insists that I’m more adult. “Mas… responsabile,” he blurts out. (Poor thing, he speaks in a mixture of Spanish and Italian that I call Spitalian).

Even men seem me to view me differently, as if they had a sixth sense for the passage of time. Apparently I’m now available to be hit on by a whole new bracket of men, as in old, older, oldest. And no, I’m not talking about salt-and-pepper George Clooney types. I dig those. I mean the kind that kick you out of your seat on the bus and qualify for a for free passes.

“They’re probably just trying to be nice,” he says innocently. “You know,” he explains, “like the sweet elderly people who offer children candy or cookies?”

I suppose that’s exactly what 80-year-old Luca, whom I’ve named “Er gatto,” was up to the other day when I walked past him to order my cappuccino. He meowed at me. Now that’s classy. I wonder what nonna would say if she knew that nonno was busy meowing and waving his cane at the ladies in the bar. Candy and cookies aside, he wasn’t cute.

Neither was the pensionato who slunk past me while walking his dog and hissed, “Sei bona.” (A vulgar way of telling a woman she’s sexy). It was mortifying. A livid part of me wanted to call the man a maiale (a pig). The other part begged respect for the ole’ guy. After all, he must be someone’s grandpa.

The icing on the cake came when I had Sunday breakfast at my bar last month. Minding my own business, I was happily working my way through my cornetto when an older man (late 60s to early 70s) approached my table. Since I was near the bathroom, I assumed that’s where he was headed.

“Excuse me, haven’t I’ve seen you somewhere before. Do you ride the 80 bus?”

I gulped. It couldn’t be what I thought it was. Stay calm, I told myself. Normally, I’d just shoo the guy away. But I felt silly telling a senior citizen that I was already fidanzata and not interested. So I responded, “Yes.”

He smiled. He said he’d seen me a number of times on the bus and worked at the Senate. Did I work in the center of town, he asked.

Well, he continued, I must be very “responsabile” (that word again) if I commuted an hour a day.

The Senate (an unspecified branch) was looking to hire an enterprising “ragazza” and he thought I might be the perfect fit.

Thank you, I said, slightly curious.

But what did a “ragazza” mean in employment terms? I asked cautiously. He must have more information, a job description for example.

It seemed I’d thrown him a curve ball. “Oh yes, of course,” he stumbled, “I will certainly look into that for you.”

Then came the kicker. “All you have to do is give me your phone number and I’ll get in touch with you regarding all the details for the position.”

I was ready. “Well,” I said, “why don’t I just call you on your cellphone or at home for the information?”

He looked a bit baffled. How would that go over with the Mrs.? He followed with the “‘What’s wrong with you little girl? Don’t you know anything?’ look and said, “You can’t just give me your phone number?”

I buckled. Maybe there was a Senate job. And I didn’t have it in my heart to be rude. Later, I told Fabio the story. He shrugged. “You don’t find jobs that way,” he said.

That’s it? I panicked. “You don’t have any other advice for me? You don’t think he could be a crazy stalker guy do you?”

Two weeks passed and I heard nothing. Then one day the man called. “We met at the bar,” he said. I remember, I replied.

He’d waited for me at the bus stop several times over the past few weeks, he said. He’d wanted to give me more information about the job, he said.

I told him what I should have from the start, “I’m not interested, thank you.”