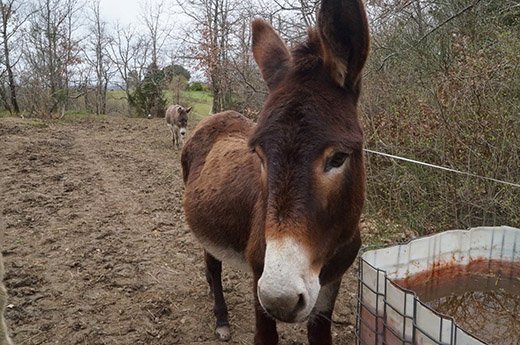 Donkeys often don't know what's bad for them so you need to pay attention...
O

ur neighbor in our French town left recently, putting us in nominal charge of his chickens. And since chickens need meals, I decided to create a menu to make them think they’d been transported to Michelin–starred Paris. This naturally meant adding some creative touches. Let me start with one of my typically high-class menus:

My menu idea came out of something in my cat’s daily blog (which I ghostwrite).

My new (and avid) dining clients are adorable Rhode Island Reds, known in Italy as Ermellinata di Rovigo. To be truthful, my menu idea came out of something in my cat’s daily blog (which I ghostwrite). That said, she had nothing special to share with the world, so the chicken menus came to her diligent ghostwriter’s mind.

And I’m glad it did. Discovering what chickens can and cannot eat suddenly made me aware, as both a ghostwriter and a diligent cook, that what we feed to our animals is just as important as what we feed to ourselves, though humans tend to take themselves far more seriously. My neighbor issues succinct and precise food instructions before leaving, “Oh, they’ll eat anything except bread, and they love salad.” This puzzled me since I was around chickens as a child and I’m pretty sure we didn’t eliminate bread.

But you can learn a lot as a ghostwriter. One reader, seeing my kitty feeding bread to ducks beside a park river, issued an immediate admonishment. “Never give ducks bread as they get sick from it.”

Did I know that? I didn’t. No one had ever told me not to feed bread to ducks. Was this part of a gluten-free obsession now directed at fowl? And if so, why didn’t I know about it?

After having fed ducks all my life I was suddenly guilt-ridden about all the sickness I might have spread.

So I did a little homework. Ducks and other water fowl should not be fed bread because the ingredients can cause an affliction that goes by a lovely name, “angel wing.” It’s a disease picked up by ducklings that inhibits the proper growth of wings. The poor little chicks that get it see their flying equipment stick out like fixed airplane wings (or those of angels in flight.) It’s a formidable and life-threatening malady, so no more bread for ducks.

Pressing ahead, I found out that even songbirds must be fed carefully to preserve the sound of their music. No bread, chocolate, avocados, or salty foods (no potato chips, bacon bits, or peanuts).

I do save very hard stale bread for our darling local donkeys, as do the neighbors, but their owner doesn’t seem to mind. But even he’s told us that bread, soft bread in particular, gives his more sensitive animals painful indigestion.

Ducks and other water fowl should not be fed bread because it can cause an affliction called “angel wing.”

Last winter, I picked up 20-kg bags of healthy donkey food, and learned another lesson. Though donkeys are far more able to digest fibrous grasses and shrubs than horses, they must not be allowed to graze on alfalfa or too-rich grassy fields as they tend toward obesity. They need protein, and the donkey meal contained plenty.

Donkey eating habits are similar to those of goats, but goats, alas, have their own bans: no avocados, chocolate, kale, tomatoes, holly leaves, or azaleas. How sad for goats, though interest in kale seems to be on the wane even among humans — this comes after the rush to include it in everything from macaroni to martinis. Donkeys can laugh at goats and their no-no list. Along with a considerable number of humans, they adore avocados. Also like humans, donkeys are encouraged to eat more of the foods they love when young, pregnant, lactating, or when they’ve reached senior donkey status.

And thank heavens for that last one. I thought I’d have to give up guacamole.