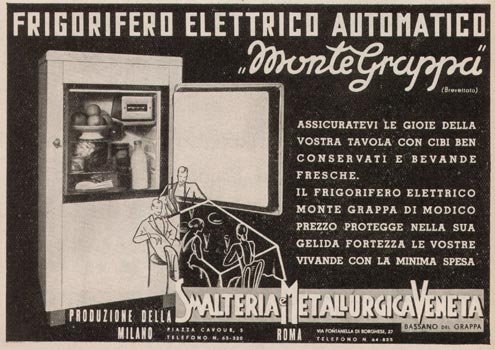 Until the postwar, most urban Italian households lacked refrigeration.
F

orty years ago the butler replaced the gnome. I know because I saw it. The gnome had been around since Suez, which is what my father called it. “What’s in Suez?” he’d ask. Usually the answer was something small and cold. Suez had limited capacity. Much in the 1950s did. Baffled by the origin of the name Suez, I chose my own name, gnome. I later understood my parents had purchased the tiny refrigerator about the time of the Suez Crisis, when England and France bombed Egypt after arguing over the big canal. Our Suez couldn’t have been less big if it tried, which it didn’t.

The gnome, née Suez, was a rectangular icebox no taller than chubby dwarf. Pull its outsized arm and the door popped open, revealing a dark chamber with three shelves. My mother towered over the gnome and the two exchanged frequent scowls. She wanted it to be bigger. It wanted to be left alone.

This made the arrival of the butler all the more regal. I was visiting from New York in the winter of 1972 when my mother, by then separated from my father (arguments over refrigerator size may or may not have played a role), announced that the gnome was being expelled in favor of a more sophisticated machine.

Two scruffy men came by, looked disapprovingly at gnome, insulted its scrawniness, and pulled it from the wall (it resisted, but to no avail). In went the butler. Last I saw the gnome it was being wheeled out on a squeaky cart. Good riddance, I thought.

Tall and white, upright and stiff (hence its nickname), the butler was built by an Italian company called Rex, “king,” a potentially hopeful sign. It had an icebox, six shelves (take that! gnome), internal illumination, and a thermostat.

My mother seemed delighted. At night, butler purred. The two scruffy men explained the workings of the thermostat in terms of layers of clothing. The butler’s mechanical mind — mente meccanica — would decide how many overcoats to place on the many tribes of nesting food.

Planned obsolescence was still in its early phases, limited mostly to the booming and affluent United States. People who’d held on to a car for life (if they had one) were only beginning to wake to marketing’s rousing insistence that new was good, or better. The spread of “new and improved” was the gnome’s swan song.

New and improved, latest and best, made impulse buying a tangible demonstration of success. What aged well was limited to wine, with even human beings encouraged to varnish themselves constantly, or else.

All of which gradually made me grow closer to the butler and rue the short shrift I’d given the poor gnome. So much tossing and replacing seemed over time to diminish the reputation of endurance

Not surprisingly, stores grew to the size of airports and refrigerators to the dimension of small shrines. Some now have digital panels and software systems that make them seem more like military drones ready to forage for food than the preservers of what’s inside. The supremacy of the automatic is total and spoiling, stripping appliances of their acquired character, aside perhaps from those intended to ensure the collective yammer.

None of this came to mind when the butler replaced the gnome. To me, incipient civil strife in Lebanon, radical, heady and brutal, was the source of youthful energy, albeit borrowed from a place I didn’t know. Just as disrupted peace seemed spectacularly personal, so the gnome and its successors felt like more than just rectangles in the service of embellished cold.

But a decade later the butler came under siege. The visiting parents of a friend wanted to know why it couldn’t dispense ice. “What an ancient refrigerator!” I should buy a new one, they said, a bigger and brassier and above all more modern thing, as if cold itself could enjoy bettering surgery. Workers who came and went after my mother’s death said much the same: Why the white artifact?

Yet by then I’d taken to defending the butler much as I’d mistreated the gnome. After all, the gnome had been very much alive, if cranky, when tossed. The butler did its work diligently. Why insult its honor on a lark?

Two additional decades have passed since then, and the butler, while older still, continues purring at night. I’m told it drains 100 times the energy of newer models, which instantly caress meats and vegetables in a more soothing and flirtatious way.

All this may be true but I still stick stubbornly with the butler as the only caresser I know, or care to. Who am I to expel the stalwart on a whim? Who am I to accept the salesmen of the obsolete? The circumstances and art of chilling things, like those of war, may over time shift a little, or even be made to look, well, cooler. But listen carefully and you’ll hear life’s underbelly scoffing at the ornamental. Cold is cold and rage is rage. Just ask Suez, or Syria.