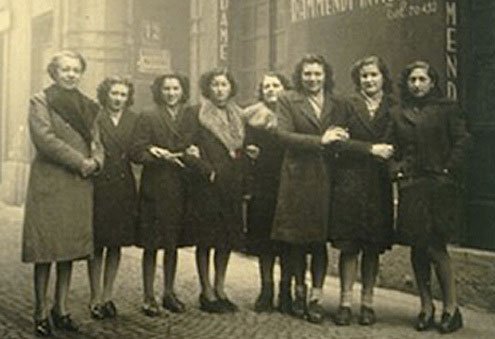 The tailoring Vivianis got their start in 1913.
L

ast week the Milan silversmith Dabbene called to tell me that the grape scissors I had taken in for repair were ready for pickup — and had been since 2000. Readers expecting a satisfying tirade on Italian inefficiency will be disappointed. After all, I was the one who, probably assuming them to be irreparable, had forgotten them for half a decade. Moreover, the satisfaction of seeing a damaged and useless object restored outshone any delay.

So, fresh from the small miracle of my scissors’ new life, I would like to celebrate Italy’s repair artisans in general and mention a few who have wrought miracles in my Milan life. Lists of Italy’s unique resources never include them, but its cobblers, restorers, re-weavers and appliance repairmen are as unique as its art, architecture, designers and cooks. Perhaps they are “more unique,” since they have disappeared from every other modern economy I know.

I come from a distinguished line of menders and savers. My father made a profession of it. A plastic surgeon, he referred the cosmetic cases to colleagues, preferring to treat patients who had congenital defects or gone through car windshields. Our medicine cabinet contained a set of instruments just for stuffed animal and doll rescue. My mother forbade me to burn an entire cardboard carton of her grandmother’s cancelled checks (1911-1946) because they could be used for lists and phone messages.

In Italy I appreciated finding allies in the fulfillment of my genetic destiny and in pursuing my parents’ crusade against contemporary waste and profligacy. But I had never thought more deeply about mending until reading a column by Harry Eyres in the Financial Times. Eyres’ reflections on the therapeutic, political and creative implications of mending illuminated my own psychology and sensitized me to the almost sacred function of Italy’s professional menders.

Further confirming that the basic healing impulse of mending is hereditary, all my miracle workers in Milan are, like Dabbene, multigenerational family businesses.

Take Mme. Viviani. The current Mme. Viviani and her daughters descend from the original Mme. Viviani who emigrated from France and established a reweaving and re-knitting business in 1913. In addition to the never-ending task of keeping up with moth damage, they have repaired a huge three-corner tear in a beloved cashmere sweater a grateful patient gave my father. They recuperated a jacket practically torn in two during a losing encounter between its pocket and a door handle. Mme. Viviani also removed a large and central hole from a Ballantyne cashmere sweater I bought for $30 at Brooks Brothers. The clerk and my husband tried strenuously to save me from my madness, but I knew that she could make it like new; she did.

Then there’s R.E.M. This appliance and supply store may not be known as far as Japan, like Mme. Viviani, but it’s no less worthy. The Silvestris have saved me from a fate worse than moth-eaten sweaters; several washing-machine meltdowns. Their spare parts and technological skill are allies in my fight against small-appliance manufacturers’ global plot of planned obsolescence (alas, with even multinational firms losing out against China, this plot will soon defeat us all.) Visiting R.E.M. also poses deep philosophical questions: Is an iron whose reservoir, cord, handle, switch and sole-plate have been replaced still the same iron?

Some readers may wonder why anyone would own or care about grape scissors. In my view only unmade beds are as existentially unsettling as denuded grape stems. They’re like the skulls that Dutch still-life painters included in their paintings of rich and unusual rugs and silver. They remind me of the chaos and decay that lie behind the material goods and fragile order of our short lives. But as long as I can make my bed, eliminate scruffy stems and repair things that break or wear out, I can delude myself that I may stave off the decadence I know will overtake me — and everyone else — in the end.