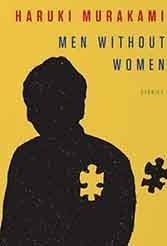 By Haruki Murakami, translated by Philip Gabriel and Ted Goossen

In 1927, young American Ernest Hemingway published a book of short stories titled “Men Without Women,” most of which were about gangsters, soldiers and bullrings. His men without women were starkly self-destructive and often on their own. Veteran Japanese novelist Haruki Murakami imposes no such ethos. His seven tales are instead much about men with women, some more sorcerous than others, but all typically ethereal.

It’s an uneven collection at best, with most stories having appeared in the New Yorker and elsewhere. “Drive My Car,” the opener, presents Kafuku, a fading, middle-aged actor and widower who hires a Marlboro-smoking female chauffeur. He tells her in detail of conspiring to meet his dead wife’s lover. Reminiscence kindles emotions and deepens the ambiguous bond with his butch driver. To remember is like acting — “Leaving who one was for a brief time, then returning.” In “Yesterday,” an awkward youth all but surrenders his girlfriend to his best friend, hoping to affirm himself through the actions of another.

Collectively, these are stories about men whose c sense of confidence, identity and self-worth quivers like leaves on an autumn tree. Passion and indifference are like defensive measures that reside on different sides of the same coin. The theme culminates in the title story in which one of the narrator’s ex-lovers commits suicide. This triggers a mishmash of regret, longing and nostalgia that can overstay its welcome.

The pace changes briefly (and promisingly) in “Kino,” about a loner who decides to open a bar but soon falls mystically afoul of some haunting if undefined remorse. It’s one thing to want to change your life, another to ecapse the ghosts of Christmases past. In “Samsa in Love,” Murakami again opens strong — imagining Kafka’s roach in human form, foraging for food and eventually falling for a hunchback locksmith. But once established, the fable goes all thumbs.

As always, Murakami’s middle-aged men love Western music (jazz and rock) and possess immensely polite sensibilities. One narrator says he tends to “dwell deep within myself” Another asks, “Who in the world am I?” The narrator of “An Indecent Organ” focuses on a plastic surgeon who loved a woman “so deeply that it made so deeply that it made him want to reduce himself to nothing.” In “Scheherazade,” recluse Habara avidly listens to a woman’s capricious stories but leaves the story as he began it, a “desert island.”

Murakami’s male coop is composed of men on the confessional cusp between lingering potency (mostly memories of passion and sex) and life’s literal dead end (death is always in the wind).

“What his time spent with women offered,” observes one narrator “was the opportunity to be embraced by reality, on the one hand, while negating it entirely on the other.” Regrettably, and despite Murakami’s elegant attention to mood and his deceptively simple candor, it is negation that wins this rueful exposé of male fragility.