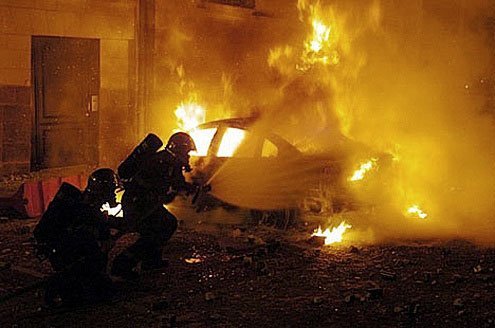 rance inhabits a future it should have known better than to beckon.

Acres of colonial spillback mishandled into urban shambles — that is the sum of the tinderbox landscape.

France (and Belgium) owned north and middle Africa for decades, anchoring an unsettled peace with troops.

England remade India and Pakistan in its image. Stay here, it told whole populations; stay in your new little England. Some did. Those that migrated to the occupying power carried school form with them. London, for its sins, is genuinely multicultural.

Raw and raging, eager for pre-eminence, its colonialism wasn’t reformist. The French wanted places to call their own.

When the casting off began, before World War II and after, France first sneered and then fought back. Miserable choices, both. It lost in Vietnam; it lost again in Algeria. The latter carried a high cost, aggregating resentment toward a colonial juggernaut that seemed to care little about colonial people once it no longer ruled them.

When those once-ruled people, mostly Muslim, weary of broken institutions, colonized in reverse, seeking refuge in freer France, they found no welcome mat.

Middle class French society, installed in affluent city centers, angled the poor newcomers into corners. It wanted no part of the colonial Diaspora. Already anti-Semitic, it turned anti-immigrant. Adolescent and prim, it applied hygiene as a barometer, tuning up its nose: France was clean, the newcomers were not.

Ghettoes followed. They got names: Bidonville, les Banlieus. The fringes of cities that harbor colonial arrivals whose presence is tolerated. Incorporation proved difficult, assimilation next to impossible. France’s core — white, Christian, educated, insular — preferred to live alone. That it no longer did made no difference.

Blue collar France, the brass knuckle population of 50s film, grew doubly suspicious and resentful: The colonials would hit them first by taking menial and muscle jobs — the mon boulot jobs. The menial they surrendered, the rest is a tossup.

Those who colonize in reverse are infinitely patient. They usually cheer their new circumstances, at least to start. No scythe-armed guerrillas enter their town, no whimsical tyrant slays millions. France was not the Congo or Algeria, and a period of indebtedness followed. It was hoped resentment would go away or find a place under the carpet.

But it didn’t go away and it wouldn’t be swept under.

France is tense about what it dislikes. It judges furiously. It behaves with the meanness of a failed superpower, which it is. Generosity is often in short supply.

In 1998, the French World Cup team fielded a number of brilliant French black African players. The team leader, Zinedine Zidane, was a taciturn Marseilles Algerian. Jean-Marie Le Pen, who heads the French National Front, couldn’t resist: This negroid team, he implied, could not be seen to represent France. Incandescent bigotry at its French best. But the fuss floated away when the team won the Cup.

He was predictably crushed by Chirac, who sought to cleanse the shame, but too late.

The fires had started.

This is the revenge of the children of the dispossessed. Unlike their more cautious, socially slotted-in parents, they have no debt to France and less fear of authority.

They can’t be humbled into accepting bad living because no experience tells them it could be worse.

They are unmarred by historical memory but ruined by reality.

Most feel that they don’t belong, that they are unappreciated by a state system that never sought them. Most exist in modesty or near-poverty in the fringes of bustling cities.

The raging jobless — dominant in these riots — have turned to quick fixes, including prostitution and drugs. Many are Muslim, yes, but the identification so far qualifies not as militancy but as a differentiation from the ruling class.

Racial violence is delayed retribution, a wild rite of non-belonging (witness the “burn, baby, burn” United States of the 1960s).

France could have seen the slow-burn of non-belonging years ago, but chose not to. A nation of immense intellect and culture, it still prefers brawn over mediation — because mediation includes acknowledgement, which is a sign of weakness.

A generation of immigrants who have lived separate, equal and law-abiding lives in an iniquitous systems cannot vouchsafe restraint among their more restless offspring.

Many have lost patience with a France in which they live but to which they do not belong.

They want their own place, charred as proof of occupancy.