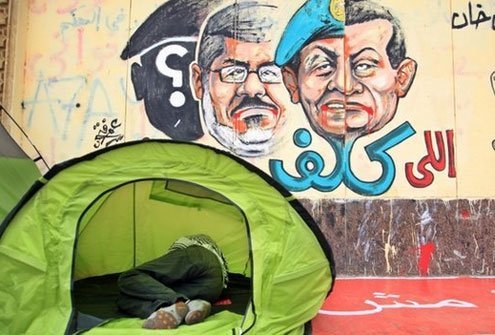 From the start, the presidency of Mohammed Morsi was seen as precarious.
I

f you believe in the rigor of semantics, there was no revolution in Egypt. What there was instead was a people-power engineered removal of a sitting dictator followed by an awkward transition to pseudo-democratic rule. The known old was transformed into an edgy new, president included, with the Egyptian military monitoring every move. The military power structure that upheld the dictatorship was never dislodged. It bent instead, shrewdly hoping to fight another day.

The have-nots under the dictator, millions of whom massed in the streets against him, remained the have-nots under the country’s Islamic president. Public rage, an admixture of exasperation, poverty, and hormonal anger given social media license, withdrew its street challenge but never vanished. Ballot box ethics, hailed by the West as a major step forward, never had sufficient time to plant let alone reap grass roots.

In essence, Egypt went from tyranny to political representation without ever stopping to consider the demands of educating an impressionable citizenry in how the new system worked, or might work. No wonder the disenchanted of a violent “before” soon became the disenchanted of an angry “after.” For the mobs, the new president seemed no more than a cosmetic caricature atop a broken and corrupt system, the only one Egypt has known for decades.

What was naively billed as the Arab Spring, a mass media connivance intended give a spontaneous uprising a Western framework — and a culturally reductive context — is now showing its tried and true stripes: a mad-as-hell fury filled with passion but lacking in constructive coherence. Protestors seek the evisceration of all that was, and now all that is, and its replacement by something new, a total overturning whose details they can’t fully articulate or formulate. That, if accomplished, is revolution. It is the wholesale replacement of existing institutions and the figures associated with it, tyrant, king or president. Usually, ideologues exist to guide and funnel street rage: they did in England, France, and Russia, whose centuries-old revolutions are those against which all others are measured. They do not in Egypt, where much of the rage is that of a rave, with frenzy, idealism and near-gangland violence locked in its very male folds.

Enter the army, or re-enter the army — no great friend of the new, now ex-, Islamic prime minister.

It has been and remains Egypt most powerful regimenting force, its only source of discipline and structure, and the long-time antidote to political intrigue, public passion and religious impositions. British colonial influence planted secular military class vitality in Africa and Asia. Egypt and Pakistan still remain under its sway, while India has managed, remarkably, to transform itself into messy but functional democracy.

The Egyptian military served up a nominal member of its own, the dictator, to vaccinate itself again the worst of the 2011 resentment. It then played a waiting game as political forces both religious and secular began doing battle for new-age rule. The battle was ugly, unseemly, indirectly corrupt, which transformed its first culminating event, the 2012 drafting of a constitution, and its second, a presidential elections, into anticlimax, if not farce. New government and opposition continued accusing each other of plots, schemes, conspiracies, which in turn made “democratic” politics seem little different that dictatorial rule. As the divisions widened, army commanders worked to remain uninvolved. Any direct challenge, they knew, would fit into yet another conspiracy: the revenge of displaced tyrant.

The wait-and-see attitude has been rewarded with public realization — call it a collective intuition — that the secular military is Egypt’s only truly non-political force, the only body that possesses both literal power and, implicitly, patriotism.

So it is that a so-called revolution now finds itself collapsing on its premise, its participants complicit in seeing the elected president and his people pushed to the sidelines by generals acting, they say, to keep the country from further bloodshed and possible collapse.

The 2011 Egyptian uprising ultimately wasn’t about colonels and generals. It was directed against an aging, bloated dictator that had gradually made himself into a billionaire pharaoh, which some people found despicable. This uprising concerns an unpopular president who, ironically, has failed to some extent failed to behave like a tyrant, mired in political intrigue that the irrationally angry can come to loathe almost as much as authoritarianism, because it suggests pretense and weakness. In Egypt, the country’s much-debated constitution was never seen as a formative document.

Now, the colonels and generals have the chance to intervene in a way they couldn’t two years ago, embraced, or at least accepted, as the only possible intermediaries in a nation trapped by its own self-sustaining wrath, a bonfire that only those with tanks, guns, and the ability to give orders seem able to defuse — until a real revolution.