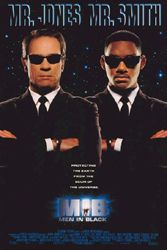 Tommy Lee Jones has that comic book knack. He can enter the bubbles and do them deadpan proud. As Agent K, a literal-minded alien-chaser, Jones shuffles between sincerity and sarcasm managing never to smile. Aliens are among us (dogs, girls and squid), but the arrival of body-borrowing avenger Edgar (poor Vincent D’Onofrio, until “Law and Order” inevitably a serial killer or a monster) spikes the punch.

When K’s partner peters out, he drafts newbie cop James Edwards (Will Smith) and reluctantly turns him into Agent J. But this is Will Smith: he doth protest a lot, and thankfully. Director Barry Sonnenfeld (“Get Shorty”) isn’t out to make a landmark dent in the genre. Instead, he unrolls Lowell Cunningham’s illustrated theme park. Rip Torn as Chief Zed, Linda Fiorentino as Dr. Weaver, and Tony Shaloub as Jack Jeebs ably support the Jones-Smith Show. Otherwise it’s all about alien ferrets in drag.

Without “Ghost Busters,” which set the benchmark for sci-fi comic timing, MIB couldn’t happen, so thank Messrs. Reitman, Ramis, Aykroyd and Murray for that. Whatever you do, dodge the semi-awful MIB2, which appeared in 2002, mostly minus Jones.