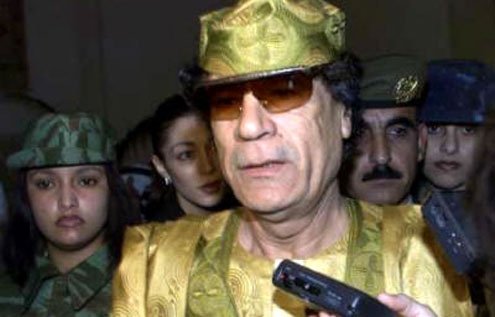 What, me worry?
U

nderestimate survival instincts at your own risk. Those who know power don’t relinquish it easily. For them, nation is self-extension, wingspan. Enemies are all those who poke at it. It’s adolescent drama for lapsed adults.

Writers in Europe and the United States don’t understand why Silvio Berlusconi stays on. He’s a walking embarrassment to Italy and to the image and standards of enlightened democratic leadership. He’s a caricature, a contaminant, a bad joke.

Enter Libya’s Moammar Qaddafi. He, too, should accept the race is run. The time of tyrants is up. He’s lost control of half his country; civil war looms. He’s a barbaric megalomaniac who employs mercenaries, dresses up in odd colors and spews nonsense.

But neither man budges.

Not only that, they fight back, apparently turning the tables on known reason.

Which begs several questions, including whether reason’s guidelines are absolute or variable. Is Louis XIV’s sensibility — l’etat c’est moi — any less compelling in pockets of the 21st century than it was in the whole acreage of the 18th? Does the widespread development of civics cancel out the abrasive hypnosis applied to reluctant populations by those who are always their own best actor in a leading role?

This in turn produces a harder but necessary recognition. Neither Berlusconi nor Qaddafi, only a few hundred kilometers apart geographically and one-time friends, are alone against the world. They are neither isolated nor abandoned. Each boasts fiercely dedicated loyalists who perceive the challenge against their bosses as no less lunatic than the disparaging of opponents.

Nor are these loyalists the walking dead. Or bribed husks. Even bad guy gets their stand. The defense may offend some, but it remains substantive.

In Italy, Berlusconi has charged ahead for the better part of two decades notwithstanding a mounting pile of allegations that would shame or just exhaust a lesser creation. But his own eyes behold the antithesis of the lesser: He is supreme, and his manly endurance not only stirs followers but cautions fence-sitters. Betrayal has consequences. As a result, even doubters stand pat or come running back when Berlusconi blunts the latest end-game. Call it the cosmic patience of a durable arrogance or a delusion of grandeur so complete it seamlessly makes the transition from delusion to reality.

Qaddafi, who has always governed through underworld methods, applies the same raw Zen. Under siege, he’s bewildered and enraged. Hurt, he strikes back mercilessly. To excited journalists who demand that he reconcile himself to the reality of his ouster, he proclaims himself unworried, says he’s beloved. Violence? What violence? What’s the problem? It’s all a big misunderstanding. And the writers leave enraged.

A self-assured leader can’t let his guard down. What others see, whether a scandal, an open revolt or images of chaos, he must trivialize, to himself and others. It’s always a plot, whether managed by closet Communists or underwater Islamists.

It’s government by teenaged thinking, in which the “me” component isn’t merely a selective truth but the only planet in an otherwise corrupt solar system. Speak highly of the “me” long enough and even Galileo surrenders, handing the keys back to Ptolemy. The sun and all else revolves around the Earth.

Berlusconi’s situation is admittedly more comfortable than Qaddafi’s. His peculiar dominion belongs to a commonweal: He was elected. No tanks entered Rome.

Qaddafi is the tank-man. He’s eligible for ouster. He’s replaced Saddam Hussein as madman of the moment, poster-child for bad instincts, analyzed ad nauseam and pilloried by pundits who take turns mocking evil tyrants and exalting courageous freedom movements with a black-and-white dedication that approximates the cynical.

Qaddafi has been down this road, though never as far. His pro-PLO period provoked Ronald Reagan’s ire and a bombing raid. At the time, he was said to be reeling. His military was disenchanted. Experts suggested he’d be the victim of a coup before the end of the decade. That decade was the 1980s.

Fair enough. Just don’t expect the nut job to see liberty, nation or leadership in any context other than what he brings to it, which in his eyes is everything.