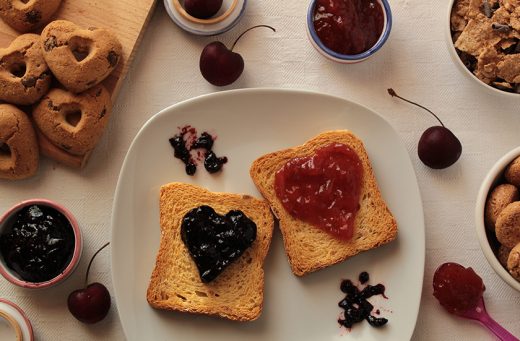 The key to dried toast is what you put on it.
O

ne of the first Italian foods I fell in love with were dried biscuits, fette biscottate, which Italians eat for breakfast. Not exactly a household name when it comes to an international discussion of Italian food products.

I first sampled the toasts when I was 19 and living in Rome, in an apartment just off Piazza San Giovanni. My housemates were three Italian women: Viviana, Nicoletta, and my roommate, Eugenia, an architecture student who’d hung a poster of Chicago in our bedroom.

None of them spoke English, and I barely spoke Italian, so we communicated mostly through hand gestures. One of the first things they pointed out was the cleaning supplies, since they took cleaning very seriously, and everyone had a weekly turn. To divvy up the phone bill, we recorded our phone calls in a peculiar “block notebook” with paper sheets that had perfect geometrical squares.

I was a pretty good housemate, but at least once I fell short. This was when I accidentally left a sanitary napkin in the bathroom. I remember the utter humiliation of finding out. All three housemates stood in a line outside the bathroom wearing scolding looks. I panicked, not knowing what had happened. Someone then pointed at the napkin (which in any case, I’d wrapped and sealed) as if it was a dead rodent.

Someone then pointed at the napkin (which in any case, I’d wrapped and sealed) as if it was a dead rodent.

“Oh, scusi!” I said, turning bright red. I picked it up and put it in the trash, all the while thinking to myself, “Was that really necessary?” If I had found one of their napkins, I would have simply thrown it away. If Italians had l’arte di arrangiarsi, the art of survival, going for them, they also had l’arte di mortificare down pat.

But my housemates taught me useful skills, like how to eat Italian breakfast. Unlike lavish Italian lunches and dinners, colazione was a minimalist meal, and often a solitary one.

The staple, of course, was il caffé, which I learned to make in the little silver pot. I loved the sound of coffee gurgling to a finish, the intense aroma filling the whole apartment. Everyone had their own little cups, and we shared a plastic container for sugar with a spoon inside. There were separate spoons for stirring, and it was very important not to mix up the spoons. I put two or three heaping spoonfuls of sugar in my coffee, but later drank it black, which I still do.

Each woman also had her own bag of Mulino Bianco biscotti. I tried several types, and decided I liked “abbracci,” as much for its name (which means “hugs”) as the cookie itself, which was part vanilla, part chocolate, forming a heart. The real curiosity of colazione, however, was fette biscottate. The tasteless toasts came to life with a bit of seasonal marmalade (apricot and fig come to mind), or the real indulgence, Nutella. This was before the hazelnut spread became mainstream in America.

Unlike lavish Italian lunches and dinners, colazione was a minimalist meal.

I even loved the post-colazione cleanup: dismantling and rinsing the coffee pot for the next person, and tucking my bag of cookies away in the pantry. Still breathing in the smell of coffee, I felt light and ready to confront the day.

I was reminded of this feeling recently while observing the morning class of an Italian university instructor. “Attacca!” he told his students, before drilling them in verbs. In English, we might say, “Get to it!” or “Nail it!” But it was in Italy where I first absorbed the idea that life is both a fight and a game. To perform well, you should be quick on your feet — which a caffeinated, sweet colazione bodes well for.

A few years ago, I found fette biscottate in the international section of my grocery store back in America. I began eating them for breakfast, Americanizing them with spreads like peanut butter and jelly. I gave them a new name— mouse toast —when I suspected I had a rodent in the house and left a toast out on the counter as test food.

The next morning, the toast was uneaten, but lying on the ground like a hockey puck — as if my little housemate was engaging me in a game.