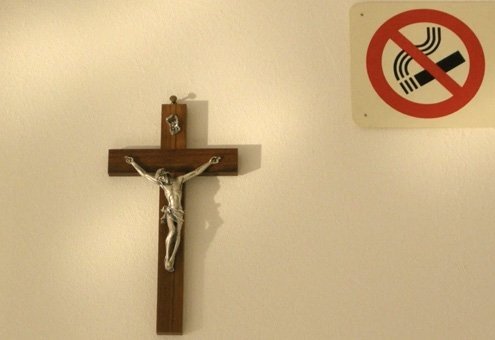 A black crucifix watched over us.
T

he harbingers of Christmas in Milan are here. As moss for crèches pushes chrysanthemums from my flower stall, Christmas cards displace school supplies at the stationer’s and up. All this makes me remember my first Milan Christmas in 1992.

Like Mary, I was expecting a December baby. I was also away from home. But while angels watched over Mary, a smoking gynecologist watched over me. Mary’s due date was a joyous holiday, while mine — December12 — marked the anniversary of a 1969 bomb that killed 19 people in a central Milan bank, igniting a decade of homegrown Italian terrorism.

I was admittedly better prepared than Mary, having taken the childbirth class favored by Milan’s best families. There we learned to breathe properly and that we should pack our hospital travel bag — the valigetta — with rolls of toilet paper and disinfectant as well as pretty bathrobes. We took a field trip to Milan’s Mangiagalli hospital, the public facility where I planned to deliver.

Relatives offered to introduce us to someone more important than a doctor, “La Baldini,” Mangiagalli’s head obstetrical nurse. Evidently no one worth knowing in Milan managed to enter the world without La Baldini (Italians often refer to important people by their surnames, with article “the” preceding them). We dutifully met “the” 80 year-old Baldini at her home, an apartment on the Mangiagalli obstetrics’ floor. She promised to take good care of me and make sure I got a private room in the hospital’s paying section. People like us couldn’t be in a ward! All this for 500,000 lire (about $400 at the time).

Paying the staff of a public hospital outraged me. But my Italian husband smiled and thanked her profusely. Later on, swayed by the Tangentopoli or “Clean Hands” corruption scandals in full swing at the time, we embraced the new climate of rectitude and decided to go it alone.

When asked about the hospital, my doctor waved his Marlboro and shrugged. The Mangiagalli’s doctors were Milan’s best, he said, but “commanda la Baldini…” — “the” Baldini was in charge.

At around 11:30 p.m. on Dec. 11th, I realized it was time for the Mangiagalli. Thanks to the knowledge acquired on the field trip we navigated the hospital’s dark corridors (and paper signs) with ease. The doctors said I had long wait ahead and belittled my assessment of the rapidly evolving situation. Ma signora…

I refused to let the staff begin outdated “preparation” procedures I knew were obsolete outside Italy. The contractions were intensifying. There wasn’t time, I told them. They rolled their eyes at what they considered a pathetic attempt to escape an enema and a shave. Ma signora…

I finally just grabbed my husband and dashed towards the delivery room. We’d only gone a few steps when the water broke.

With a collective Dio mio! the staff dropped their syringe and clippers to chase us. The baby arrived as I reached the delivery room table. My husband caught it before it landed on the floor.

For the rest of the night I was left on a gurney in the corridor. The next morning La Baldini, who hadn’t received her payout, told us there were no private rooms available.

I was sent to a ward where one wall was lined by a row of six iron beds under chipped white paint. A black crucifix watched over us. The mattresses were wool not straw. Otherwise, Florence Nightingale would have felt entirely at home.

Florence would not have approved of the bathrooms, whose filth explained the need for toilet paper and disinfectant. Post-partum hygiene consisted of a 6 a.m. visit from a crew bearing huge stainless steel teakettles of hot water. They poured this between our spread legs and then energetically slapped on a doormat-size cotton pad. It hurt so much that I’d abscond whenever I heard teakettle noises moving down the hall. From a bathroom stall I could hear the staff interrogating the others about “l’Americana.”

But it wasn’t grim. My ward mates, just as drunk as I was with feel-good, post-partum hormones, eagerly discussed the gory details of childbirth. We swapped confidences, chocolates, books and magazines. (I found no takers for “Maus,” Art Spiegelman’s graphic novel of the Holocaust, whose cover featured a huge swastika. Strange choice, but then again I’d been to Dachau on my honeymoon). We shared the thrill of making calls from our beds rather than the floor’s pay phone — cousins had let us try a cell phone for the first time ever. When the noisy extended family of the Neapolitan woman in bed 6 made landfall, the visiting hour scene turned into a Ferragosto picnic complete with pizza, pastiera, sfogliatelle and sweet bubbly wine.

Our lumpy bodies, bathrobes and unwashed hair smoothed away class, race and social differences. We were as alike as the rows of babies in cribs we trooped out together to see. Our babies were tiny, perfect, and unmarked by life. The mixed bag of visitors from outside suggested they wouldn’t stay that way.

A few days after I gave birth, La Baldini informed me that a private room was finally available. I could move if I wanted. But it was too late. I wasn’t interested. I was having too much fun.