Memories of a kingpin 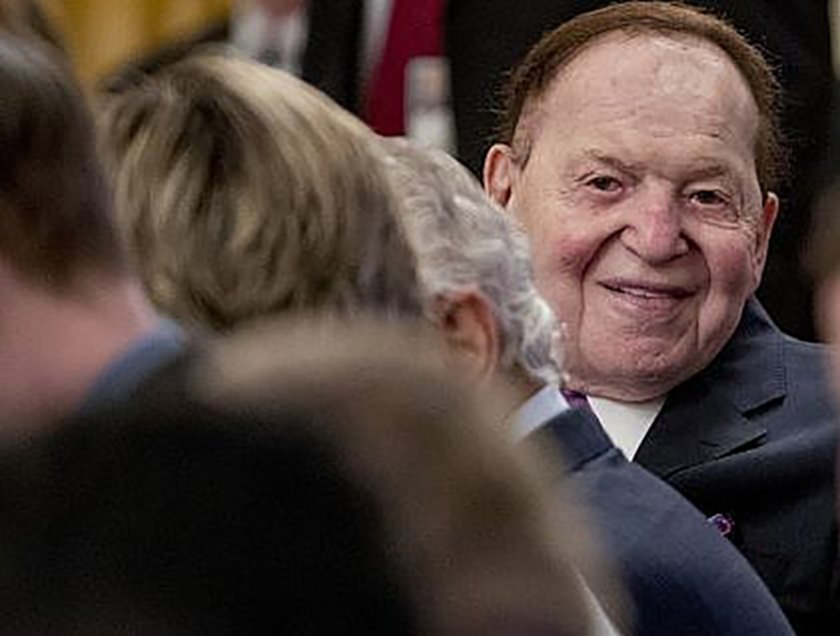 heldon Adelson, a one-time tour operator out of Boston, who parlayed an annual electronics and computer convention into a casino empire sprawling the globe and became a conservative king maker in American politics, is dead.

It feels strange typing those words, here, now, two weeks after his death in Malibu. Because, you see, I knew Sheldon Adelson before he owned a mega-casino, before he wielded such power and influence that even Donald Trump bent his knee to Adelson and kissed his ring.

I was a senior investigative and political reporter covering the Clark County Commission for the “Las Vegas Sun,” a scrappy little afternoon paper founded by Hank Greenspun, another legendary Jewish figure in Las Vegas, a man who received a pardon from President John F. Kennedy for raising money to supply weapons to a little upstart group fighting for Israeli independence.

Hank was long gone when I began working for the “Sun” in 1994, but his face was impishly emblazoned on the paper’s logo. So Hank was always winking at me whenever I looked at the paper.

It was run by his son Brian and the former Nevada Governor Mike O’Callaghan, a gruff but tender bear of a man, an ex-Marine who got his leg blown off in Korea. His roots in Democratic politics ran deep. He taught former U.S. Sen. Harry Reid at Basic High School in Henderson, Nevada.

The Clark County Commission I covered had control over development along the famous Las Vegas Strip. It set the terms for casino moguls who wanted to build bigger and build higher, so that in the end they were building casinos larger than anyone had ever seen, and taller too. They’d blast through zoning ordinances and airport height restrictions to create fantasy worlds that were the most bombastically disguised casino parlors on Earth.

Sheldon Adelson was a shrunken, wizened troll of a man, swimming in his dark blue pinstripe suit.

Adelson ruled a meager domain back then: The legendary Sands Resort, which had seen better days when it was home to the Rat Pack (Sinatra, Sammy, Dino). And the Sands Expo Convention Center, which had become home to the very popular and lucrative Comdex electronics convention.

The Sands Resort was a shell of its former self, pardon the pun, reduced to hosting made-for-cable contests of muscle-bound freaks in singlets fighting each other with what appeared to be giant Q-tips on a plank suspended over a pool. The 1950s were long gone.

I walked past this very spectacle one sun-scorched afternoon while being escorted back to Adelson’s office, located in the back of the vast hotel grounds. The office occupied several rooms in a wing of the motel, a low-slung, single-story midcentury construct that smelled of the collected must of mold, 50 years of flop sweats and first night jitters, 50 years of gamblers’ regrets.

Not the penthouse nest or the wood-paneled office overlooking the main floor of a casino mogul’s domain.

In fact, it was a cluttered row of rooms, scattered with basic hotel furniture, knickknacks and memorabilia on bookshelves and display cases. In the last room of the suite, Adelson sat behind a massive desk, mahogany, I guessed, with a filigree inlay.

The desk was covered in newspaper and magazine clippings, which he showed me one by one as if to convince me of his bona fides. He seemed to be trying to put on his best performance at a job interview. In figure, he was a shrunken, wizened troll of a man, swimming in his dark blue pinstripe suit, tiny manicured pink hands shooting out of his impeccably sharp French cuffs.

When Trump became president, he pushed to get the U.S. Embassy moved to Jerusalem.

And he was trying to impress me, in my cheap Macy’s shirt and tie, and Austin Reed blazer.

He offered me a Cuban cigar from a box on his desk. I demurred.

He wanted me to know how much he respected me as a reporter, respected the newspaper industry. Hell, he bought a license to sell papers back in Boston when he was 12, and read several papers a day. He wanted to know that he read my story about his boy, Lance Malone, a Vegas motorcycle cop and former underwear model who Adelson was running for county commission.

I’d written about how Adelson was single-handedly financing Malone’s campaign, and that he was trying to replace a pro-union commissioner with Malone and tip the balance of the commission to a more Adelson-friendly group.

He wanted me to know that he appreciated I was doing my job, but also wanted me to see how all the other casinos dumped money into other county commission races, using an assortment of shell companies to hide the fact it was all coming from the same source. I vetted his information, found what he was saying was true and wrote an exposé on how the casinos on strip “folded and bundled” contributions into candidate’s coffers to get around the campaign contribution limits.

That didn’t do me any favors with the other casino bosses, but the story was an eye-opener. It was the first time anyone took the casino industry to task for their undue influence over the county commission.

It marked the start of his personal involvement in politics. Lance Malone won that race in 1996, but was defeated four years later, became a lobbyist and was caught up in one of the city’s biggest political scandals in decades.

Another time, Adelson called the newspaper looking for me. Someone had vandalized his pool cabanas and scrawled anti-Semitic sayings and swastikas on the walls of the cabana.

I was the only one he wanted to cover the story.

I went to his house and parked in the drive. I knocked on the door, a beefy guy in a light weight Armani suit with a definite bulge under his jacket answered. Sheldon’s wife greeted me. She was very nice, wore a 1,000-watt country club smile, but was clearly upset by the break-in.

Sheldon appeared and we walked out to the cabana. He showed me the graffiti and our newspaper’s photographer took pictures. I went back to the office and filed my story, and never thought about it a second time.

When I moved back to Florida I lost touch with Sheldon, as there was no reason to contact him.

Sheldon continued to invest in political campaigns, with a long string of losses to show for it.

He sold Comdex for $800 million, knocked down the Sands and built the Venetian, right across the Strip from rival Steve Wynn’s Bellagio.

He became one of the biggest donors to the Republican Party, investing millions into Newt Gingrich’s run for president in 2012, and Dean Heller’s run for U.S. Senate.

And then he scored big, backing Donald Trump for president. The pro-Israel Adelson found a soulmate in Trump, who was also pro-Israel and had just as big an ego.

When Trump became president, he pushed to get the U.S. Embassy moved to Jerusalem. Florida Gov. Ron DeSantis, who was a member of Congress at the time, was one of the biggest backers of that move.

I became a legislative reporter for the “Tallahassee Democrat,” and it sent me to Israel two years ago when DeSantis led an entourage of Jewish campaign backers, business leaders and state officials on a tour there during his first year in office.

I wish I’d known in advance that Adelson was going. I would have changed my plans just to pull up a chair next to him, sit down and chat about our Las Vegas days. DeSantis and the others would have looked on, and wondered, with some awe, “Who the heck is this guy?”

Just a guy who knew Sheldon Adelson back in the day, before he became a king maker.